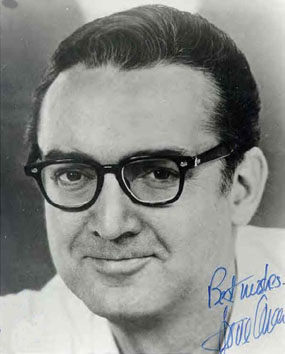 Born to Billy and Isabelle Allen (née Donohue) in New York City, Allen became an announcer for a commercial classical music radio station, KFAC, in Los Angeles and the moved to the American radio network Mutual Broadcasting System in 1946, talking the station into airing a five-nights-a-week comedy show Smile Time, co-starring Wendell Noble. After Allen moved to CBS Radio's KNX, an all-news station, in Los Angles, his music-and-talk half hour format gradually changed to include more talk on a full-hour late night show, boosting his popularity and creating standing room only Studio Audience. During one episode of the show reserved primarily for an interview with Doris Day, his guest star failed to appear, so Allen picked up a microphone and went into the audience to ad lib for the first time. His radio show attracted a huge local following and in 1950, it replaced Our Miss Brooks, exposing Allen to a national audience for the first time.

Allen's first television experience had come in 1949 when he answered an ad for a TV announcer for professional wrestling. He knew nothing about wrestling, so he watched some shows and discovered that announcers lacked well-defined names for the holds. When getting the job, he created names for many of the holders, some of which are still used today.

After CBS radio gave Allen a weekly prime time show, CBS television believed it could groom him for national small-screen stardom, thus giving him his first network television show: The Steve Allen Show. The Steve Allen Show premiered Christmas Day at 11 am in 1950, then later moved into a thirty minute, early evening slot. This show required him to uproot his family and moved to New York as a coast to coast program could not originate from Los Angeles at the time. The show only succeeded with moderate ratings and was canceled in 1952, after which CBS tried several shows to showcase Allen's talent.

Allen achieved national attention when he was pressed into service at the last minute to host Arthur Godfrey's Talent Scouts when Godfrey was unable to appear. Allen turned one of Godfrey's live Lipton commercials upside down, preparing tea and instant soup on camera followed by pouring both into Godfrey’s ukulele. With the audience uproariously and thoroughly entertained, Allen gained major recognition as a comedian and host.

Allen was a regular on popular panel game show What's My Line? and returned frequently as a panelist after Fred Allen's passing until the series ended in 1967.

Considered by many as the "father of late night television comedy," he was the original host of NBC's Tonight Show. During the 1963-1964 season run, Steve made a return to live late night TV with a syndicated Variety Show from Los Angeles. He had access to videotape and multiple camera shots for his many skits on stage, off stage and in the street. According to TV Guide, this show fared well against the current "Tonight Show," hosted by Johnny Carson, especially with "the college age crowd." As the show was only seen in major cities, it was not able to compete with the major networks in the long run and was canceled after its first year. Many other successful TV projects for Steve would follow, but this was his last late night endeavor.

In his later years, Allen became something of a Memetic Mutation for his prolific career as an author: he published over 50 books in his lifetime, in a wide variety of genres.

On October 30, 2000, Allen was driving to his son's home in Encino, California, when his car was struck by another vehicle backing out of a driveway. Neither Allen nor the other driver believed he was injured and damage to both vehicles was minimal, so the two exchanged insurance information and Allen continued.

Shortly after arriving at his son's home (after carving pumpkins with his grandchildren and taping a radio tribute to an old friend, satirist Paul Krassner), Allen did not feel right and decided to take a nap. While napping, he suffered a massive heart attack and was pronounced dead shortly after 8 p.m. Autopsy results concluded that the traffic accident earlier in the day had caused a blood vessel in his chest to rupture, causing blood to leak into the sac surrounding the heart known as haemopericardium. In addition, he suffered four broken ribs as a result of the accident.