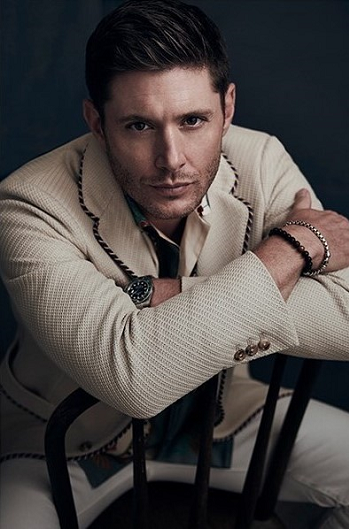 Jensen Ross Ackles (born March 1st, 1978 in Dallas, Texas) is an American actor, director, producer, and musician. He's one of those actors where you can throw anything at him from an acting challenge point of view; you can shoot him, tie him up, torture him, dumb him down, make him all bloody and bruised, wring the emo from him, and generally have him flung against a hard, inanimate object nearly every episode and he'll eat it up with a spoon and knock it out of the park every time.

As well as being known for modelling photos, he's also well-known for being in shows such as Supernatural (Dean Winchester), Dark Angel (twins Ben & Alec) and Smallville (Jason Teague), as well as being in movies like Devour (Jake Gray) and My Bloody Valentine 3D (Tom Hanniger). His first big part was on Days of Our Lives, as Eric Roman Brady (Sami's twin).

Outside of Supernatural, he's been the voice of Jason Todd/Red Hood in Batman: Under the Red Hood, Gibson in the video game TRON: Evolution, Kyle Madigan in The 3rd Birthday, and Bruce Wayne/Batman in Batman: The Long Halloween. He's playing Soldier Boy in season three of The Boys and Sheriff Beau Arlen in season three of Big Sky.

He and his family reside in Austin, Texas where they run a brewery, Family Business Beer Company

. He and Danneel formed a production company, Chaos Machine Productions, and signed an overall deal with Warner Bros.. They are set to executive produce a Supernatural prequel, The Winchesters, with Jensen reprising his role as Dean playing The Narrator.

Tropes associated with this actor's career include: