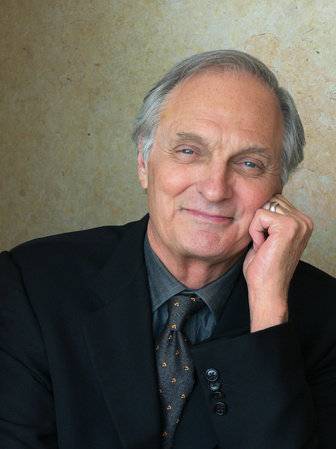 "It's too bad I'm not as wonderful a person as people say I am, because the world could use a few people like that."
Advertisement:

A six-time Emmy Award and Golden Globe Award winner, he's enjoyed a long and highly accomplished career with a litany of roles under his belt. However, he's likely best known for his iconic performance as Captain Hawkeye Pierce in the long-running TV series M*A*S*H. In contrast to the fun-loving and rebellious Hawkeye, Alda has mostly played staunch authority figures and/or villains in his later career (something that can partially be explained by an offscreen incident with an overzealous dentist when he was in his 50s; the man cut through the frenum of Alda's upper lip, removing part of its support and movement structure and making it all but impossible for Alda to smile correctly).

He is also a major supporter of the sciences and hosted Scientific American Frontiers on PBS from 1993 to 2005. In 2009, he founded the Alan Alda Center for Communicating Science at Stony Brook University, which teaches scientists how to present their work in way the general public can understand.

He's also known for his simultaneously thick and nasally voice and for his outspoken political views. Most definitely a Cool Old Guy.

Film roles on this wiki

Television roles on this wiki