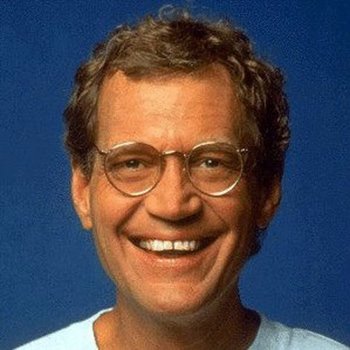 And I wonder, if everything could ever feel this real forever.
"And now… a man who shouldn't be up this late… David Letterman!"
— Dave's first intro line from 1982.
"Well, why don't I start off with a question, here: just how pissed off are you?"
"Johnny, lemme give you a little piece of advice: you keep using language like that, and you're gonna find yourself out of a job."
— Johnny Carson's opening question to Dave on Letterman's first Tonight Show appearance after NBC made their decision.
Advertisement:

David Michael Letterman (born April 12, 1947 in Indianapolis) is an American comedian and Talk Show host famous for (re)defining the genre in the post-Johnny Carson era. Letterman's shows (The David Letterman Show in 1980, Late Night from 1982–93, and The Late Show with David Letterman from 1993–2015) came to be known as examples of the "Anti-Talk Show", a type of program that is relentlessly self-aware and intent on deconstructing the conventions of the very medium that gives it life.

From the beginning, Letterman fashioned his persona as a smartass host who was "too hip" for the talk show format, and proceeded from there to make a mockery of the entire genre as a result — for instance, he would often barely hide his contempt for almost every aspect of show business, from his producers and writers, to his wardrobe director, his celebrity guests, his sidekick Paul Shaffer, and even his own fame. All of this pales, however, in comparison to his loathing for "rival" Jay Leno, to whom he lost the coveted Tonight Show gig after Carson's retirement, a development about which he is still clearly bitter some two decades later, though it should be noted that Leno claimed in 2013 that they weren't on unfriendly terms, and even have occasional discussions about the industry.

Letterman took frequent shots at his network (first NBC, then CBS), and then his network's parent company when NBC was acquired by General Electric. He would intentionally bomb jokes in the monologue, and openly waste network airtime on ridiculous gags whose only purpose served to illustrate simply that, "Hey! I'm wasting NBC airtime here!" He eschewed the typical talk show uniform of a tailored suit in favor of a tie, a blazer, khakis...and white Adidas wrestling shoes.

He dropped random things off roofs, he blew random things up on-air, he staged impromptu audience competitions (in addition to showcasing Stupid Pet, and Human, Tricks), he used "viewer mail" segments as an excuse to break into various non sequitur-style sketches, he once did an entire episode with mannequin stand-ins and prerecorded audio, he did stunts in a variety of ridiculous suits (made of velcro, tortilla chips, etc.), and essentially offered a biting parody of the Hollywood machine from the perspective of a Midwestern "everyman" who somehow found himself trapped inside the establishment at the height of its decadence.

As a side-effect, Letterman was sort of feared in the business when it came to interacting with the guests. He was intimidating, and could be somewhat mean to them. Until the late 1990s when he started to mellow down, it was fairly well-known that his only real friends in the business were Warren Zevon, Regis Philbin, and Julia Roberts. In one interview in the early 2000s, Roberts mentioned the fact that Letterman had softened up and that now every actress was a "lovely girl". Letterman's quip was "Oh, you know I'm just woofing."

Ironically, Letterman's influential "anti-talk show" sensibility ended up saving the talk show format as we know it, which had started showing signs of rust towards the end of Carson's Tonight Show stint. Without Letterman mocking the genre in the 1980s, today's genre staples (especially Conan O'Brien's shows) would likely not exist in their current form.

In April 2014, shortly before his 67th birthday, having spent close to half his life doing the show, Letterman announced he would be retiring. A week later, CBS announced his successor would be Stephen Colbert, who began his run on September 8, 2015. David Letterman taped his 6,028th and final late night program on May 20, 2015. Since many consider Late Night and Late Show to be the same program, Letterman essentially managed to surpass Carson as the longest-tenured host of an American late-night talk show by three years.

Or did he? It was later announced that Letterman would host a new talk show for Netflix entitled My Next Guest Needs No Introduction, with the first episode premiering January 12, 2018, and with subsequent episodes premiering monthly.

Tropes and trivia associated with Letterman's career as a whole: