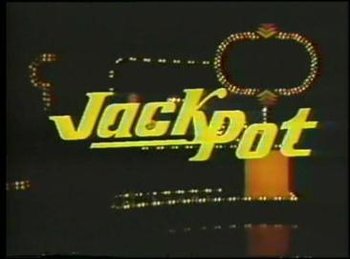 Game Show franchise created by Bob Stewart and originally hosted by Geoff Edwards in which 16 contestants competed for an entire week, answering riddles for cash prizes. One contestant was randomly selected to be the Expert, while the 15 others sat on bleachers. The Expert selected one of the 15 contestants in the bleachers, and that contestant would read their riddle and its cash amount. If the Expert got it right, they would stay in place; if not, they would trade places with the selected contestant.

One card was randomly selected to be the "Jackpot!" riddle, which the Expert could answer right away or hold off to add to the Jackpot. There was also an opportunity to win a "Super Jackpot" (worth up to $50,000) if its card appeared, or if the Jackpot amount matched the last three digits of the Super Jackpot total.

Jackpot! ran from January 7, 1974 to September 26, 1975 on NBC, after which Stewart re-tooled the format into a 1977 pilot called The Riddlers (hosted by one David Letterman) which didn't sell. An equally-unsold pilot, recorded at CBS Television City in Hollywood, California for CBS themselves on June 9, 1984, and hosted by Nipsey Russell, mostly returned to the original format, but ousted the Super Jackpot and tacked on a bonus round. In 1985, the show appeared on USA Network, taped in Canada (airing there on Global, and on other Canadian stations via syndication {as Global only existed within Ontario at the time}) with Mike Darrow as the host and some slight changes (including referring to the Expert as the King/Queen of the Hill).

After a decent three-year run, followed by a one-year hiatus, the show moved to daily syndication with Geoff returning as host; the show ran just over a half-season, and ended when the distribution firm went bankrupt.

Not to be confused with the Norwegian movie Arme Riddere, which is known as Jackpot internationally.