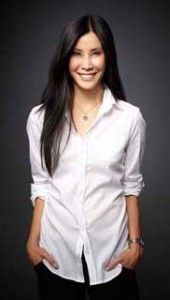 Lisa J. Ling (凌志慧 Líng Zhìhuì, born August 30, 1973 in Sacramento, California) is an American television journalist, born in Sacramento, California on August 30, 1973. Her parents divorced when she was age 7, and partially because of this, she bonded more to her younger sister Laura. Her first appearance was on a local news show called 'Scratch', who recruited her out of a casting call in a Sacramento mall. Scratch was nationally syndicated, drawing the attention of Channel One News at age 18. By age 25, she was named senior war correspondent. She was also doing desk work with Anderson Cooper, who was also at Channel One at the time.

In 1999, Ling won a seat on The View to replace the outgoing Debbie Matenopoulos. Which she enjoyed, but her idea of compelling television and production's idea of compelling television were often at odds: Ling wanted to cover more serious topics; everyone else wanted to gossip about celebrities. The matter came to a head in the wake of 9/11, and Ling left in 2002 for National Geographic Explorer, and a side job as special correspondent for The Oprah Winfrey Show.

Odds are, you still know Lisa from The View. Most of the media sure does.

In 2009, Laura, along with Euna Lee, were captured by North Korean border guards while filming a documentary about refugees fleeing into China, and were subsequently held for 4 1/2 months.

If you don't know Lisa from The View, odds are you know her from the media campaign she waged to get her sister back.

Lisa hosted her own series Our America With Lisa Ling, a documentary series on the Oprah Winfrey Network from 2011 to 2014. Afterward, she started up a Spiritual Successor series for CNN titled This is Life.

Ling attended the University of Southern Caifornia, and is fluent in Spanish. She's been married to radiation oncologist Paul Song since 2007, and gave birth to a daughter, Jett, in March 2013.