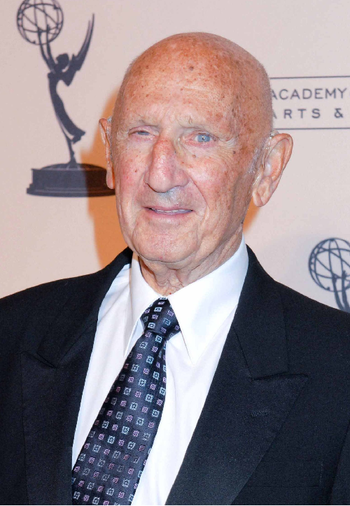 Bob Stewart (born Isidore L. Steinberg; August 27, 1920 – May 4, 2012) was a Game Show creator and producer who, as part of Mark Goodson's staff from 1956 to 1965, created Password and To Tell the Truth. He developed The Price Is Right independently (as Auction-Aire), and it was picked up by Goodson-Todman in 1956. In 1965, Stewart left Goodson-Todman and started his own production company with Bill Cullen as emcee many times. Stewart's most famous solo series were the various incarnations of Pyramid; his Signature Style were word games, recycling elements from other shows of his (either cancelled or piloted but never made it to series), or both. The library of his shows and their format rights are currently owned by Sony Pictures Television, which acquired the company in 1992.
Advertisement:

Stewart died on May 4, 2012. While he had nothing to do with the current CBS version of Price, the show recognized him as its creator in a post-show memorial on May 7 - a marked (and welcome) change from several instances in the 1980s and 1990s where Bob Barker referred to Goodson as the show's creator.

His son Sande Stewart has also carried on the family business. Sande worked with his father on their late 1980s revivals; he produced his own short-lived show on NBC, Your Number's Up, with frequent Stewart celebrity Nipsey Russell as host, Inquizition and Hollywood Showdown for GSN, various lottery game shows (including Powerball Instant Millionaire), and was a creative consultant on Scrabble Showdown and the 2016 revival of The $100,000 Pyramid.