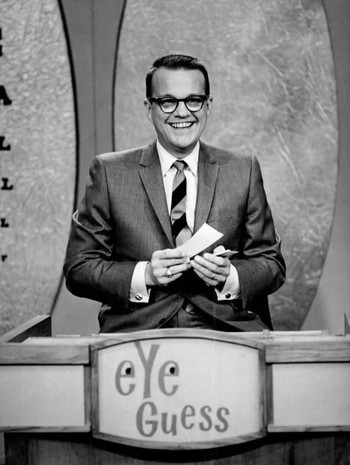 Late-1960s NBC Game Show produced by Bob Stewart after leaving Goodson-Todman, in association with Filmways (who would later acquire Heatter-Quigley Productions). Two contestants faced a board of nine windows in a 3x3 setup. The windows were opened, with the outer eight (numbered) showing answers, for eight (later seven) seconds. Afterward, host Bill Cullen read a question and the players had to find the window the answer was in; 10 points were awarded for a correct pick, and that player kept going until picking a wrong window.

If the player believed that the answer was not among the eight shown, s/he said "Eye Guess" and the center window was revealed: the answer if correct, a blank space if wrong. The first to reach 100 points won the game and some cash ($1 per point) and played the Bonus Round.

Sometime in 1969, the format was changed to use prizes instead of points in the front game. Whoever won seven prizes first would go to the Bonus Board.

While the entire run was destroyed (network practices of the era), from the surviving footage it's clear Eye Guess ran on Rule of Funny: the game wasn't taken too seriously, Bill and later announcer Jack Clark bantered at times and lobbed puns at each other, the home game plug used a Password game at least once, and by 1969 a prize began to be awarded for four consecutive wrong picks - both players got a set of home memory-improvement courses.