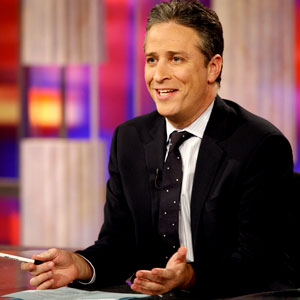 Stewart on the set of The Daily Show, 2013
"I have complete faith in the continued absurdity of whatever's going on."
— Jon Stewart
Advertisement:

Jon Stewart (born November 28, 1962) is an American comedian and political satirist best known for hosting the Emmy Award-winning The Daily Show with Jon Stewart on Comedy Central from 1999 until 2015.

Born in New York City and raised culturally Jewish in Lawrenceville, New Jersey, Stewart attended the College of William & Mary in Virginia and graduated as a psychology major. A difficult relationship with his father led to his abandoning his birth name of Leibowitz in favor of Stewart, his middle namenote originally spelled 'Stuart'. After college he bounced around between different jobs until he wound up as a bartender at the famous City Gardens nightclub in Trenton, which sparked his interest in comedy. He started out in stand-up, making the rounds of the comedy clubs in New York City to hone his comedic talents, and joined Comedy Central in 1991 as a co-host of Short Attention Span Theater, but his career was really jump-started in 1993 with an appearance on Late Night with David Lettermannote who would, twenty years later, be succeeded on The Late Show by Stewart's close friend and longtime colleague Stephen Colbert. This appearance led to an MTV talk show called The Jon Stewart Show, which was surprisingly popular and ran for two years, ultimately being Screwed by the Network. After bouncing around the late-night circuit for a few years, including guest hosting for Tom Snyder, he took the helm of The Daily Show and the rest, as they say, is history.

Stewart's impact on political satire in the United States is difficult to overstate. When he took over The Daily Show from previous host Craig Kilborn, it was merely another News Parody a la "Weekend Update". Under Stewart's leadership, the program shifted from simply parodying local news programs to taking aim at the major political stories of the day, with the show really finding its feet with "Indecision 2000", its coverage of the 2000 Presidential race. A heartfelt, sincere, and utterly heartbreaking speech in the aftermath of the September 11 attacks cemented The Daily Show as much more than just another news parody, and from there on it only kept getting bigger. Stewart has gone head-to-head with some of the biggest figures in news and politics, including sitting Senators, veteran news anchors, and heads of state, with his interviews cited as some of the most incisive anyone could face during their career: Tucker Carlson made the mistake of inviting Stewart to discuss his book on Tucker's CNN show Crossfire, a show that featured hyperpartisan "political debate" between two hosts, a liberal and a conservative. Instead of discussing his book, Stewart spent his entire spot verbally eviscerating Carlson with such devastating clinical precision that Stewart's speech was directly cited by the President of CNN as the reason why it needed to be cancelled.

Stewart was the first choice to succeed David Gregory as host of Meet the Press in 2014, and The Daily Show spent a good fifteen years as the acknowledged "watchdog" of the 'real' news networks. He also directed the 2014 drama Rosewater, based on the true story of Maziar Bahari, an Iranian journalist who was imprisoned on suspicion of being a Western spy. Shot in Jordan in the summer of 2013, the film is also directly responsible for the existence of Last Week Tonight with John Oliver; Oliver's stint as guest host while Jon was away was so well-received it caused HBO to come calling later that year.

Oh yeah, and he also won the Emmy for Best Variety Series ten years in a row, losing in 2013 to The Colbert Report — which was hosted by Daily Show veteran correspondent Stephen Colbert (and had Stewart as an executive producernote Eleven in a row! I won again, motherfucker!!). That's in addition to multiple nominations (and wins) for Best Writing for a Variety Series and Best Individual Performance. His anchoring of Indecision 2000 and Indecision 2004 also netted him two Peabody Awards.

And to cap it all off, after the passing of Walter Cronkite, Stewart was voted the most trusted newscaster in America.

As if all that wasn't enough, The Daily Show has also proved to be a launching pad for young talent. Steve Carell got his start here, as did Aasif Mandvi, Mo Rocca, Lewis Black (Root of All Evil), Larry Wilmore (The Nightly Show), Ed Helms, Samantha Bee (Full Frontal with Samantha Bee), John Oliver (Last Week Tonight with John Oliver), and Hasan Minhaj (Patriot Act with Hasan Minhaj).

And then there's the aforementioned Stephen Colbert, host of the phenomenally successful The Colbert Report and the other half of what is widely considered the 21st century's greatest American late-night comedy duo. While other correspondents have come and gone (often on to bigger, better things), Colbert was not only acknowledged as the best correspondent during his run, but remained integral to the Daily Show even after the Report began airing; the two co-hosted the Rally to Restore Sanity (and/or Fear) in 2010, tossed from one to the other right before the "Moment of Zen", frequently crossed over with each other's shows, co-anchored eight straight live election specialsnote every Presidential and midterm election from 2000 through 2014, and were generally considered two halves of a whole.note To the extent that, in its finale, the Report was revealed to be one long Daily Show segment, with Colbert signing off with, "From eternity, I'm Stephen Colbert. Jon?" prompting Jon to introduce the postponed Moment of Zen for that day. You really can't separate these two. Stewart joined The Late Show with Stephen Colbert as an executive producer and gave his Sam a sendoff into his next big career move with the words, "Play ball!"

On February 10, 2015note all of eight weeks after the Colbert Report went off the air, Stewart announced his impending retirement to spend more time with his family; his last show was on August 6, 2015. He was succeeded by the South African-born comedian Trevor Noah.

He initially made an effort to stay away from TV by returning to stand-up comedy, crusading for a renewal of the 9/11 First Responders healthcare bill, and working — alongside his wife, Tracey — with Farm Sanctuary, a shelter for abused factory-farm animals on his farm in Middletown Township, Monmouth County, New Jersey.

However, political upheaval and lawmaker intransigence meant he couldn't stay away for too long. He began with guest appearances on The Late Show with Stephen Colbert (where he apparently lives under Stephen's desk) to make political commentaries and harangue Congress for not doing enough to help 9/11 first respondersnote the haranguing worked as he and his fellow campaigners eventually shamed Mitch McConnell into getting the bill passed and signed into law.

He's since returned to TV with The Problem With Jon Stewart on Apple TV+. Rather than taking a satirical look at the news, he now explores one issue in depth each episode.

Oh, and he was also a huge fan of Gravity Falls and in fact saved it by convincing Alex Hirsch, who was planning on ending it with Season 1 on a Cliffhanger out of exhaustion, to finish the story.

Not to be confused with Green Lantern John Stewart.