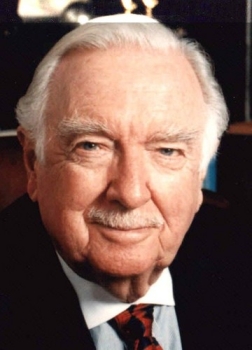 Walter Leland Cronkite, Jr (November 4, 1916 – July 17, 2009) is best remembered as the anchorman for The CBS Evening News from 1962 to 1981. During that time, he was the man America turned to for the news of some of the most important news stories in the history of the country. At the peak of his popularity, he was often cited as "the most trusted man in America" (and even today, years after his death, he still appears in the top ten listing of individuals whom the people trust the most). Oddly enough, Cronkite feuded bitterly with the other news anchor that is often held up as a paragon of journalistic integrity, Edward R. Murrow. Cronkite and Murrow didn't so much feud over the other's integrity or skill as journalists, but rather over a series of misunderstandings and accidental snubs that turned into downright enmity.

The stories on which he reported truly shaped modern America: first-person accounts of Allied bombing runs over Germany in World War II, the Nuremberg trials, front-line combat in the Vietnam War, the assassinations of John F. Kennedy and Martin Luther King, Jr, the Watergate scandal and the subsequent resignation of Richard Nixon, and the Iran Hostage Crisis. His reporting on the U.S. space program, from Project Mercury to the Moon landings to the Space Shuttle, earned him the Moon Rock Award (the only recipient who was not a member of NASA). The Lyndon Johnson quote above was in response to an op/ed piece he did on the pointlessness of the Vietnam War after personally touring the American lines, which did indeed turn a lot of people against the war.

Cronkite was born in Saint Joseph, Missouri, but grew up in Houston, Texas. He graduated with a degree in journalism from the University of Texas (where he was a member of the Chi Phi fraternity, along with his good friend, actor Eli Wallach). He met his wife, Mary, in 1940, and the two were together until her death in 2005. He retired from CBS news in 1981, and afterward was a part-time actor, a sailor (he favored sailboats, and was even given the chance to take the helm of the USS Constitution when she was under sail), a voice-over artist (We're Back! A Dinosaur's Story, Liberty's Kids), and a political activist (he was a confirmed liberal, and supported many humanitarian causes worldwide). He loved music and reading, and was a wargamer (he enjoyed Axis and Allies and Diplomacy). Late in life he became a friend of The Grateful Dead's Mickey Hart and learned drumming from him, actually getting pretty good.

Cronkite ended every one of his news broadcasts with his Signing-Off Catchphrase, "And that's the way it is..." followed by the date on which the appearance was aired. He died of cerebrovascular disease in 2009 at age 92, still atop the list of most trusted people in America.

A Trope Codifier for Glasses Pull, as seen in the famous clip where he takes off his glasses and looks into the camera to announce the death of John F. Kennedy (while clearly trying not to cry), or when he did the same on announcing Neil Armstrong setting foot on the Moon.