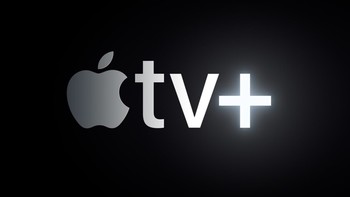 is a streaming service created by Apple.

An extension of the Apple TV device and its associated digital media player of the same name, Apple TV+ offers exclusive, premium content featuring some of the biggest names in entertainment, intended to compete with the likes of Netflix, Prime Video, Hulu, Disney+ and HBO Max. But unlike any of those services, which offer third-party content and existing works, Apple TV+ originally hosted only original programming specifically created for it, but market realities are now driving them to look for licenses for older content as well. As well, each show is given an individual judgement call on whether its seasons are released weekly or all at once, rather than being completely one or the other like most other streaming services.

Apple is making an effort for the service to be relatively family friendly–-it doesn't mandate all content to be PG-13/TV-14 like Disney+, allowing its more mature content to carry a "soft" R-rating or equivalent. CEO Tim Cook reportedly rejected a TV series based on Dr. Dre's life

over its depiction of sex, violence and drugs. While the service was being developed, employees disparagingly referred to it as "expensive NBC"

Apple TV+ launched in the U.S. on November 1, 2019, with an international rollout to follow afterward. In 2022, the Apple Original film CODA became the first streaming original film to win the Academy Award for Best Picture.note While Nomadland received a day-and-date release in theaters and Hulu, it is not considered a streaming original.