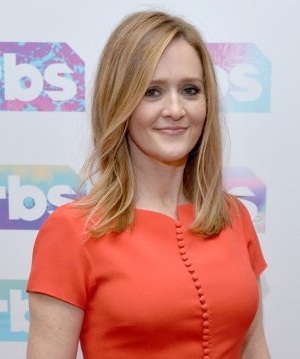 Samantha Bee (born October 25, 1969 in Toronto, Ontario) is a Canadian-American comedian, writer, producer, political commentator, actress, media critic, and television host. Bee is best known for being a correspondent on The Daily Show with Jon Stewart, where she became the longest-serving regular correspondent.note Albeit with frequent absences for maternity leave 2006-2010 after having each of her three children. She would comment on this by referring to herself as "Pregnant Lady" at times and by joking that she and her husband, fellow correspondent Jason Jones, were "procreating like farmers." In 2015, she departed the show after 12 years to start her own show, Full Frontal with Samantha Bee.