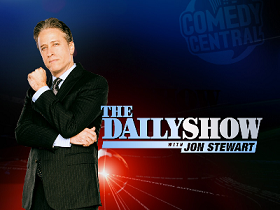 "Go onnnnnn..."
"One thing about being in the TV news business is that you are usually better off if Jon Stewart at The Daily Show is not mentioning your name. Usually if you turn up on that show it is Not Good for you."
— Rachel Maddow
Advertisement:

The bulk of the long-running satirical news program The Daily Show on Comedy Central, hosted by Jon Stewart from 1999—2015.

Stewart himself took over from Craig Kilborn in 1999 and turned the show into a household name,note Stewart turned the show into the premier news/political satire show in the world, with "Indecision 2000" cited as the moment when the show really came into its own but it's also launched a few careers among its correspondents. Steve Carell and Ed Helms are successful alums, and Stephen Colbert got his own spinoff program called The Colbert Report (a parody of confrontational talk programs such as The O'Reilly Factor,) which became a runaway success leading him to be picked to take over for David Letterman. Two more Daily Show alums have since been given their own Comedy Central shows, Lewis Black's Root of All Evil and the critically acclaimed Important Things with Demetri Martin.note The other major Daily Show correspondents now with their own show are John Oliver, whose show Last Week Tonight with John Oliver airs on HBO, and Samantha Bee, whose show Full Frontal with Samantha Bee airs on TBS The show's writing staff has also published two books in connection to the show, both parodies of high-school textbooks; they are America (The Book): A Citizen's Guide To Democracy Inaction from 2004 and Earth (The Book): A Visitor's Guide To The Human Race from 2010.

It can be watched online for free

(if you're lucky). In Canada, it is available at the Comedy Network's site

In March 2013, Stewart announced that he would be taking a three-month hiatus

from hosting the show in order to direct his first-ever feature film, Rosewater. Regular correspondent John Oliver filled in as host for 8 of the 12 absent weeks (06/10/2013 - 08/15/2013). Stewart returned to hosting on September 3, 2013. Oliver subsequently left the show to start his own program on HBO called Last Week Tonight with John Oliver, which premiered in April 2014.

In May 2014, Comedy Central announced that Daily Show contributor Larry Wilmore would have his own spinoff titled The Nightly Show, which premiered in January 2015, taking The Colbert Report's former spot.

The Daily Show with Jon Stewart contains examples of: