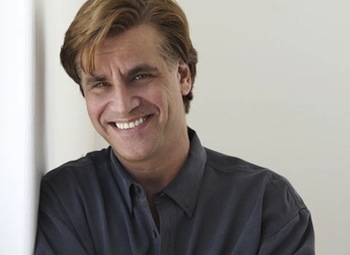 "Roxy Sorkin, your father just won the Academy Award. I'm going to have to insist on some respect from your guinea pig."
Advertisement:

Aaron Benjamin Sorkin (born June 9, 1961) is an American screenwriter, director, producer and playwright. He's the man behind Studio 60 on the Sunset Strip, Sports Night, The Newsroom and The West Wing. His scripts have many distinctive traits, including a dialogue style known for timing and finesse that has garnered the moniker "Sorkinese". His shows are also notorious for characters walking down hallways while expositing at high speed.

Also has a habit of projecting his personal life into his shows — duly lampooned on Saturday Night Live (a sketch in which The West Wing's characters reenact Sorkin's marijuana hallucinations).

Sorkin also wrote several plays, such as A Few Good Men and screenplays such as the film adaptation of A Few Good Men, The American President, Charlie Wilson's War, The Social Network, for which he won an Oscar for Best Adapted Screenplay.

His most recent venture into television, the HBO series The Newsroom, starring Jeff Daniels premiered in 2012 and ended with a shortened final season in December 2014. Unlike several of his other TV projects, The Newsroom was not canceled by the network and he also wasn't thrown out (as happened on The West Wing) but he thought the story and characters did not provide material for more seasons. Sorkin has since stated in interviews that he does not want to write anything but theater and feature length movies in the future, explicitly citing that The West Wing is a Tough Act to Follow.

He had a well-known on/off relationship with Kristin Chenoweth for several years. He is not related to Arleen Sorkin.