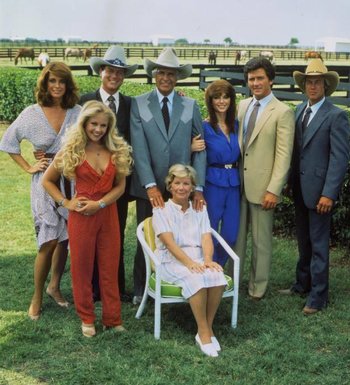 The Ewings of Southfork. Standing left to right: Sue Ellen, Lucy, J.R., Jock, Pam, Bobby, Ray Krebbs (sitting) Miss Ellie
"If I did give you power then you've got nothing! Nobody "gives" you power. Real power is something you TAKE!"
— Jock Ewing
Advertisement:

Note: If you want to read about the actual city of Dallas, see DFW Metroplex.

As the name might suggest, the series was set in Texas, based around the Ewings, a large Dysfunctional Family of oil barons. Family patriarch John Ross "Jock" Ewing had built up Ewing Oil and married Eleanor "Miss Ellie" Southworth, the daughter of a rancher and together they had three sons:

Initially the show focused on Pamela Barnes, Bobby's sweet natured and beautiful new wife as she attempted to fit in with the Ewing family, but the chemistry between Larry Hagman (J.R.) and Linda Gray (Sue Ellen) quickly took center stage. Hagman's J.R. in particular became one of the great characters of television history, his greedy, sleazy yet oddly charming villain becoming an icon of the decade.

The show produced two of the most famous stories in television - both cliffhangers (a staple of the series). The first in 1980-81 was the mystery of 'Who Shot J.R.?', the answer to which was at that time the most watched episode in television history.

The second story was... less successful. When star Patrick Duffy left the series, his character was McLeaned. But with declining ratings, the return of the original series show runner after a brief absence, and the cast missing Duffy, the actor returned in the final moments of the eighth season, leading to the ninth season opening with the revelation that Bobby's death and the subsequent season eight were all an elaborate dream. Needless to say, reaction was quite polarizing to say the least, with some happy to see the character return but others irritated due to the invalidation of the previous season.

Inspired a glut of failed copycat shows (Secrets of Midland Heights and Texas), the most successful being Dynasty, its So Bad, It's Good counterpart that ended up becoming the show's chief rival during the mid-1980s. It was also given a Spin-Off, Knots Landing, which was based around Gary Ewing, though the dream season ultimately led to both shows severing ties with each other.

There have also been three made-for-TV movies. The first, Dallas: The Early Years (1986), was a Prequel that chronicled the feud between Jock Ewing and Digger Barnes in the 1930s. After the series ended, two reunion movies were produced - J.R. Returns (1996) and War of the Ewings (1998).

A possible movie remake with John Travolta as J.R. Ewing and Jennifer Lopez (!) as Sue Ellen has been in Development Hell for years. Problems include the recent Real Life oil crisis, the increasingly negative views of Americans toward oil companies, and doubt in the entertainment industry that fans would accept another actor portraying JR.

TNT revived the series in 2012, with a ten-episode run that included some of the original cast members but focused on the next generation of the Ewing family. Larry Hagman passed away on November 23, 2012. He was given a funeral in episode eight of the second season (which aired on March 11, 2013). The show was cancelled by TNT after airing its third season in 2014.

Now has a Character Sheet under construction here.

The revival (2012) provides examples of: