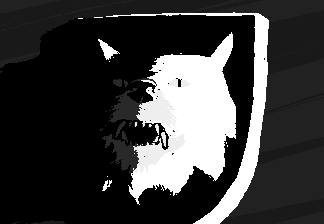 "Do you have even the SLIGHTEST CLUE how many times that wolf head over there has SCARED THE SHIT OUT OF ME?????"
"Fur, feathers, scales, every manner and type of dead skin surrounded me, each frozen in uncanny stillness as though they were trapped in a world where time had simply stopped. Everything except their eyes of course. Their eyes had never been alive and they all seemed to stare in my direction so that to look too close at any of them was to gaze into that unseeing glass."
— Alexander Scaplehorn, The Magnus Archives
Advertisement:

In media, every villain base, haunted castle, or scary old house seems to have a scary stuffed animal tucked away in a dark corner somewhere. Crocodiles, bears, gorillas, wolves, lions, owls (the huge unblinking owl eyes that seemingly follow you around the room, admit it, that's freaky)... or worst of all, it could be a Human Head on the Wall.

These are typically encountered by a child or teenager exploring the house, creepy background music optional. Sometimes the character gets up in the middle of the night to find a bathroom and/or a drink of water and encounters the stuffed monstrosity that way. Sometimes, the character walked right past it when the beast was brightly illuminated during the daytime, but now that it is night, and the house is dark, running into the animal freaks them the hell out. Bonus points if the person stumbles into it in the dark, shines their chosen source of light on it, screams, and runs away. Double bonus points if, instead, a lightning strike outside the window lights up the room so it can be seen.

This rarely happens to any character past their mid-twenties.

Also rarely, the animal will occasionally come alive, due to some kind of Applied Phlebotinum, and when it does come alive, expect it to attack.

Not to be confused with Taxidermy Is Creepy, which is more about taxidermists themselves, rather than the products of their profession.