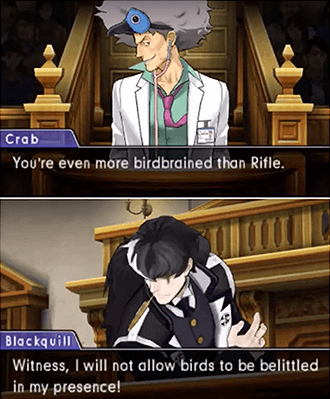 "Well, it's no secret how I feel about surgeons. I hate them. I'd liken them to rocks, but that would be an insult to rocks because, you see, at least rocks are useful to society. We build bridges with them. We stone surgeons with them."
— Dr. Cox, Scrubs
Advertisement:

You want to tell someone else that they're as dumb as a brick. But then you answer, that's a terrible thing to say about bricks.

More generally, any insult following the form of 'I'd call you an X, but that would be an insult to all X's.' Typically, X will be an inanimate object, or something detestable. 'I'd call you a motherfucker, but it'd be demeaning to those guys who fuck their mothers.' Using this latter form is like saying that the one being insulted is far worse and more worthy of contempt than the detestable X to which they're being compared.

Another variant is acknowledging that at least X is much more worthy of some respect. 'I'd call you an X, but then again I take it back because at least X is <insert positive description here>.'

A third is to state the insult, and then apologize — to any X who felt insulted by the comparison.

A fourth, related to the above, is calling someone X, and when actual X find out, they react with outrage, at being compared to that someone, or alternatively, someone getting aggressive defending X.

This can also involve Self-Deprecation if the insulter notes their own negative qualities, then says how much worse the insultee is.

See also Even Evil Has Standards, My Friends... and Zoidberg, Bait-and-Switch Comparison, Insult Friendly Fire and Insult Misfire. If the insulter compares the insultee to an X, but the insultee notes positive qualities of X see Insult Backfire. May invoke Sympathy for the Devil.

On the DVD, that scene was called "An Insult to Stupid People".

He was less insulted by lead singer Gregg Alexander mentioning he'd kick Marilyn's ass in as he was being mentioned in the same breath as Courtney Love.

An Insult To the Ocean

In "Eternal Sonata," Polka's mother uses the waves of the ocean as a metaphor for the ugly conflicts created by human desire, but then notes that her comparison is rather insulting to the ocean.

An Insult To the Ocean

In "Eternal Sonata," Polka's mother uses the waves of the ocean as a metaphor for the ugly conflicts created by human desire, but then notes that her comparison is rather insulting to the ocean.