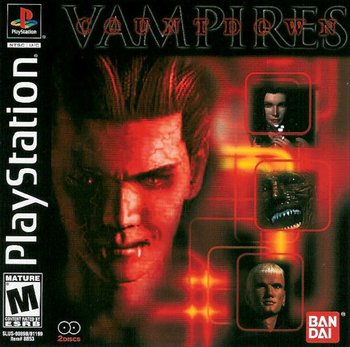 Countdown Vampires is a Survival Horror Game developed by K2 LLC and published by Bandai for the Playstation on December 22nd, 1999.

Officer Keith J. Snyder has been put on an assignment as a bodyguard to several VIPs for the grand opening of the city's new horror-themed casino hotel, The Desert Moon. And boy, tonight is not his lucky night. Soon after the party starts, a fire breaks out in the casino, and when the sprinkler system comes on, it sprays black water all over the dancers, turning them into vampires which proceed to attack the guests. Utter pandemonium soon follows, during which some fire-spurting object torches the black water, turning it white.

One of the vampirized dancers gets knocked into the water after she tried to attack Keith, and is miraculously returned to normal. Keith is handed a tranquilizer gun to use, and decides to try and find a way out.

Keith later finds out in the course of the game that the vampire attacks is tied to something much sinister.