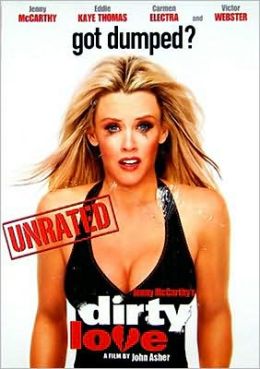 Dirty Love is a romantic comedy written and starring Jenny McCarthy (while also directed by her then-husband John Asher) that took the Golden Raspberry Award for worst movie of 2005.

Rebecca, a Dumb Blonde, thinks she has it made with her hunky boyfriend. After catching him cheating, she freaks out and seeks help from a psychic (Kathy Griffin) and her two friends, one of whom is an ethnically confused Carmen Electra. To prove she can get over him, Rebecca throws herself back into the dating game, seeking the "white pony" that the psychic instructed her to look for. However, through a series of dating disasters and other mishaps, Rebecca realizes that she may have had love all along.