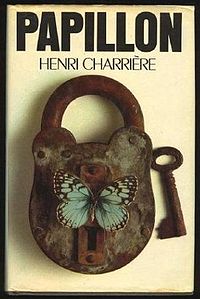 Papillon is a 1969 French autobiographic novel by Henri Charrière. The author reportedly spent the years 1931 to 1945 in various prisons on a murder conviction.

Charrière, better known as "Papillon" for a butterfly tattoo on his chest, is a young man falsely sentenced to a life of hard labor at the Penal Colony of French Guiana. From the moment he is shoved into a post-trial cell the only thing he can think of is escape. For fourteen years he suffers in a cruel prison in between escape attempts. Eventually, he is taken to the inescapable Devil's Island, which he then escapes and finally reaches freedom and sanctuary in Venezuela.

Made into a 1973 Allied Artists movie, starring Steve McQueen and Dustin Hoffman. Another film adaptation was made in 2017. It is directed by Michael Noer and it stars Charlie Hunnam and Rami Malek.

Followed by a sequel, Banco, his attempted revenge against his enemies in France.