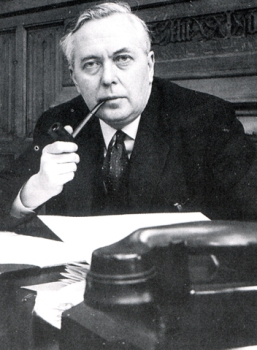 The man with the pipe.
"A week is a long time in politics."
Advertisement:

James Harold Wilson, Baron Wilson of Rievaulx, KG, OBE, PC, FRS, FSS (11 March 1916 – 24 May 1995) was a British politician who served as Prime Minister of the United Kingdom from 1964 to 1970 and again from 1974 to 1976. He served as a member of the Labour Party and led it during five general elections, winning four of them. He represented the now-defunct constituencies of Ormskirk (from 1945 to 1950) and much longer for Huyton (from 1950 to 1983note He was the only Member of Parliament that constituency had.).

Born in Huddersfield as the son of a teacher and a chemist, Wilson won a scholarship to a local grammar school. However, due to a failure to get work, his father moved the family to Spital, on the Wirral, and he then became the first head boy of the school he attended for Sixth Form, and then he went to Oxford. After a brief time as a Liberal, he became a Labour member and was one of the very large class of Labour MPs who arrived in the 1945 landslide, after being a civil servant during World War II.

In 1947, he got the Cabinet-level job of President of the Board of Trade (now generally known as Business Secretary), but resigned from the Cabinet in 1951 in protest over Hugh Gaitskell's budget. In 1960, while serving as Shadow Chancellor, he challenged Gaitskell for the Labour leadership but failed. When Gaitskell suddenly died less than three years later, Wilson became leader. As leader, Wilson crafted an image as a "man of the people" to contrast with the aristocratic background and peerage of his Conservative counterpart, Prime Minister Sir Alec Douglas-Home,note Wilson's lampshading of Home's former status as the 14th Earl of Home, which the latter had abdicated the year prior upon being named prime minister, led him to retort, "I suppose Mr. Wilson is the fourteenth Mr. Wilson." and emphasised his party's technocratic leanings over their nationalisation programme.

Under his leadership, Labour narrowly defeated Douglas-Home's Tories in 1964, winning a majority of four. This quickly proved unworkable, so he called another election in 1966 and this time won a landslide victory. In a surprise outcome, he lost the 1970 election to a Conservative Party now led by Edward Heath. It is often said that Wilson/Labour lost because England had been eliminated from The World Cup just three days before the vote, though the announcement of an unusually bad balance of payments — on the same day — and anti-immigration sentiment may have had more to do with it. The hung parliament of February 1974 led to Labour winning most seats but not most votes, Wilson becoming PM and then took the country to the polls again in October. This time, Labour got a majority of three. Once the majority disappeared, Labour had to rely on the Liberals to stay in power for the remainder of his term.

Wilson surprised everyone when he stood down in March 1976. He had Alzheimer's disease, which became apparent after he left.note (Upon receiving his Alzheimer's diagnosis, Wilson intended to resign immediately, but was persuaded by a meeting of the full Cabinet to defer resignation for three months; he used the time to answer the letters sent to the PM by members of the public appealing for help, and was astonished by how many there were. In one example, a woman from Colchester with five children faced eviction, and the local council refused to help. Wilson telephoned the council's leader in person, threatening to send the Local Government Audit Commission to go over the council's books — councillors held responsible for discrepancies could be "surcharged" and barred from public office. The woman and her family were rehoused the next day...) He had informed James Callaghan, his eventual successor, of his decision to resign some months beforehand, thus Callaghan was able to get a headstart on his rivals in the race for the Labour leadership. Another possible partial influence may have been his discovery, according to his former press secretary Bernard Donoughue in his autobiography Downing Street Diary: Volume 1; with Wilson In Number 10, that his best and oldest friend, Lord Wigg, Paymaster General during his first term in office 1964–1970, had been an MI5 "mole", passing details of Cabinet meetings to the secret service — who in turn passed them on to journalist Chapman Pincher at the Daily Express, a man and a paper who had personally despised Wilson since the "D-Notice

" scandal of 1967. Apparently, Wigg had a secret "second family", and MI5 had used their discovery of this to blackmail him.

During Wilson's time in office, the longest for any Labour Prime Minister until Tony Blair, the following happened:

His first premiership coincided with the peak of the British post-war boom: the days of Swinging London, The Beatles, the 1966 World Cup, and miniskirts.note He capitalised on the Fab Four and the Lions. By The '80s, however, he had come to be considered one of Britain's worst prime ministers ever, his ministry seen as the beginning of the "sick man of Europe" era with devaluation, industrial stagnation, The Troubles, and polarisation over social reforms and immigration composing his most lasting legacy, lingering by the time he returned to 10 Downing (which, incidentally, no subsequent PM has done as of 2020) in 1974. For Americans reading this, his first government can be seen as roughly analogous to the presidency of Lyndon Johnson, who faced similar domestic turmoil (over the Vietnam War and the Civil Rights Movement) during his administration that eventually caused him not to seek reelection. During his second term, public opinion really turned against Wilson, having to deal also with runaway inflation, industrial strife, and his inability to bring his cabinet in line, dashing any hopes for his reputation to recover for the foreseeable future. Even many Labour supporters see his time leading the party as a missed opportunity for greater reforms and his failures as having given rise to nearly two decades of Conservative dominance, and while he managed to hold Labour together while he was running it, in his absence the party spent The '80s tearing itself apart. Since the 1990s, however, his reputation has somewhat improved, as the liberal reforms enacted during his first government have been increasingly acknowledged. In prime ministerial ranking lists he generally makes it into the top half of the post-war holders of the office (although considering the general reputation of modern prime ministers, that may not be saying much). He was HM The Queen's first Labour and working-class Prime Minister, and by many accounts the one she got on with best personally (excepting perhaps Churchill), with the two forming a classically Odd Friendship.note She and Wilson were relatively close in age - only ten years apart. That may not seem so impressive but no other PM was born within a decade of the Queen except for Margaret Thatcher (born about a year before the Queen, and whose values and personality were so different from Her Majesty's that their relationship was a weird mix of testiness and mutual respect). As a symbol of this, Wilson the only PM the Queen dignified with the honour of attending dinner at Downing Street — other than Churchill, that is.

Wilson was a very good tactician and the first PM to understand the power of television. His precise views on Polaris varied on the audience (he ultimately went ahead with the order) and he was the first Prime Minister to be fully aware of the potential of media — for example, his famous pipe-smoking was a construct for Wilson's 'man of the people' public image: in private he smoked cigars. An attempt at a post-premiership talk show, though, failed; he just wasn't good. He stayed an MP until 1983, then went to the Lords, but dropped out of public life after 1987.

In his last two years as PM, and until his death, he repeatedly told people he was being shadowed and bugged by MI5; his claims were dismissed as paranoia until revealed to be true in 2009. It is also rumoured he was a Soviet agent, or at least a 'useful idiot' of the kind Stalin liked. To be fair, one person spreading those rumours was L. Ron Hubbard, after Wilson's government banned Scientologists from entering the UK in 1967 and Health Minister Kenneth Robinson won a libel suit against him.

Ironically, Wilson himself had no qualms about using MI-5 against the British invasion band The Move. In the 1960s, Wilson was rumored to be having an affair with his secretary. The Move's publicity-minded manager, Tony Secunda, circulated a promotional postcard for the band's single "Flowers in the Rain," which depicted Wilson and his secretary in bed. Not only did Wilson involve the MI-5, he also sued the band for libel. He won the case and had the band donate royalties from "Flowers in the Rain" to charity.