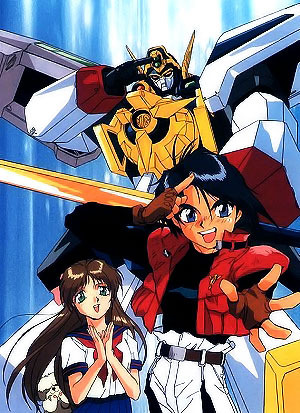 The power of justice is calling up a storm! LET'S MIGHT GAINEEEE!
Advertisement:

Brave Express Might Gaine was the fourth Brave Series installment produced by Sunrise. Might Gaine aired in Japan in 1993, with a total of 47 episodes. Unlike prior shows in the Brave Series, the robots were created by humans, as opposed to having more extraterrestrial or supernatural origins.

Might Gaine is set in the near future of year 2050 note Showa 125 as noted in-universe. Where Japan sticks with Emperor Hirohito's reign name and continue the year count even after he passes the torch to his successor. when the world's reserves of fossil fuel have nearly run out; commercial planes can't fly anymore, cars are powered with rechargeable electric batteries, and long distance trade are handled purely by surface ships such as trains. Also made possible are the widespread use of affordable Mecha made for consumer convenience, in which a good portion of them became an underground trade used for criminal ends.

Opposing them is the Brave Express Team, lead by by the teenage industrialist Might Senpuuji. Given life by an advanced AI program, he is assisted by his own team of transforming mecha. The episodes are fairly stand-alone for the first part of the series; it isn't until Might's rival, Joe, shows up that there is really any connecting thread between the episodes. The main enemy isn't even hinted at until further on.

Best known as the other Brave Series entry with Nobuyuki Hiyama voicing the Hero Protagonist.

Tropes used for this series: