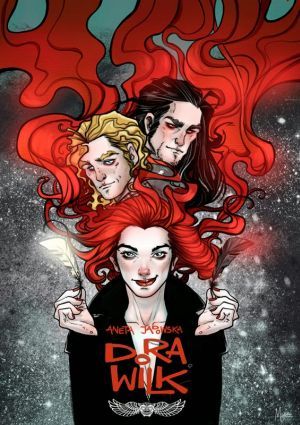 , used with permission.
"So let's sum up today's attractions: corpse, more corpses and meeting with a family in mourning. [Beat] Well, well, you sure know how to have fun, Your Bitingness."
Wolf in Sheep's Clothing
Advertisement:

Dora Wilk Series (formal name: Witch's Hexalogy) is an Urban Fantasy book series by Polish author Aneta Jadowska, set in modern Poland, mostly in Toruń and Three-Citynote  three big cities on Polish coast - Gdańsk (Danzig), Gdynia and Sopot - which are often treated as one because they lie very close to each other and thus have lots of joint administration.

The story centers on Theodora "Dora" Wilk, living a double life as a police officer in Toruń and a succubus-like witch in its magical counterpart, Thorn. While using her powers to aid her during investigations, she tries to keep herself away from magical Fantasy Kitchen Sink world. The magical world, however, comes to her, as the Council governing Thorn asks her to investigate missing and dead magical creatures. Aided by devil Miron and his friend, angel Joshua, she sets off to find the so-called "Soul Thief", at the same time solving a murder case in the Muggle world. But with world like Thorn, that's just the tip of the iceberg...

With Dora's six books published, this particular cycle is finished, but the author is planning to create a verse of novel series, with some of Dora's sidekicks as main characters. The first of those would be Szamański Blues (Shaman Blues), focused on Witkacy, and The Girl from the Miracles District, about Dora's ex-girlfriend Nikita.

Compare and contrast Anita Blake in its early stage. Now with a Characters page!