Film / The Gods Must Be Crazy 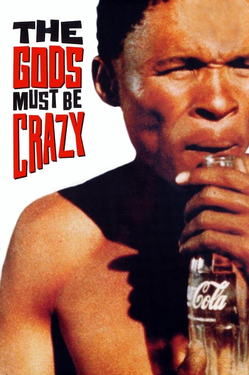 Modern society in a nutshell (or rather bottle): weird, repulsive and mad.
Advertisement:

The Gods Must Be Crazy! is a classic low budget film from South Africa from the 1980s directed by Jamie Uys (Animals Are Beautiful People).

Once upon a time, not long ago, there was a tribe of Bushmen in the Kalahari Desert who lived in harmony with each other and with the harsh environment. Then, one day, an empty Coca-Cola bottle (the classic heavy glass style) falls from the sky. We, the viewers, can see it came from an airplane, but as far as the tribe is concerned, it came from the gods.

The Coca-Cola bottle is very useful as an improvised, multi-purpose tool. However, there is only one, which inevitably leads to conflict; and since it is harder than anything that can naturally be found in the Kalahari Desert, someone gets hurt. For the sake of the harmony of the tribe, one of their members, Xi, is tasked with dropping it off the edge of the earth.

We cut to a modern South African city to establish some "tribal" habits of the "civilized" people in the film. (Translation Convention is not necessary as most South Africans can speak English while Xi and the other bushmen are unfamiliar with the language.) A couple of these city-inhabitants set out on their own quests, and they inevitably cross paths with Xi. Hilarity (genuinely) Ensues.

The film was an instant hit (despite being low budget) and was a Star-Making Role for N!xau (who played Xi, himself being a real bushman). The second film, simply titled The Gods Must Be Crazy II, was more or less as good as the first, if a bit too similar.

N!xau's popularity had him being cast in a series of comedies made by a Hong Kong company in which, rather than being called Xi Xo, he goes by his real name. Although never intended to be sequels to the original film (as the titles and plots of the films were entirely different), they were eventually released under "The gods must be crazy", added with a sequel number. The original Chinese title of the fifth film even translates to "The Gods must be funny in China" as a nod to the original film. Let's just say that these films were quite different from the original ones:

Crazy Safari featured Xi helping some Chinese people who were transporting a Chinese mummy/vampire when their plane crashed. It ends with the Chinese Zombie fighting an African voodoo zombie.

Crazy Hong Kong takes the Fish out of Water concept Up to Eleven by having Xi get stranded in modern urban Hong Kong and get into various hilarious situations.

The Gods Must Be Funny in China. N!xau now lives in a small village in China, often giving lessons about his native country. He also learned to fully speak Chinese (in reality he never did and his voice was simply overdubbed by a Chinese actor) and communicate with them. A sports promoter notices how fast he can run and manages to persuade him to enter a marathon. Hilarity Ensues as he and his team get lost during the race and in the meantime save pandas from mad poachers.