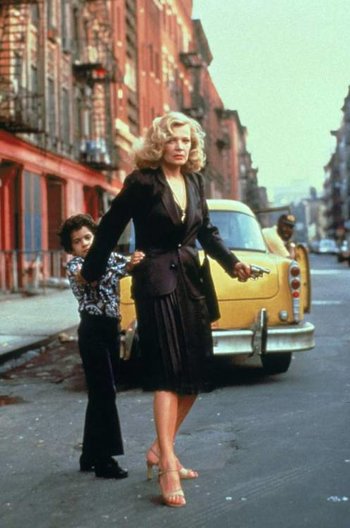 Gloria is a 1980 crime film by John Cassavetes. Its premise, of a mobgirl or similar going on the run from The Mafia and the FBI with a young boy, has been used in homage many times since. Gloria is played in the film by Gena Rowlands, who was nominated for an Academy Award and a Golden Globe, and Gloria Swenson was nominated as an AFI "Hero"

. The film ultimately won a Leone d'Oro at the Venice film festival that year (tying with Atlantic City) and a Golden Raspberry Award. Though falling within the right time period, it is not considered a Giallo film.

Cassavetes wrote the screenplay and sold it to Columbia Pictures, only coming on board to direct after his wife was cast in the title role.

After establishing within the first scene that something is wrong, Gloria serendipitously appears at her neighbor's door when they are about to be murdered by a mob hit squad. She takes their young son, Phil, to her apartment, and they promptly get killed in the next scene. It doesn't take long for the SWAT team to arrive, but Gloria has already fled with a packed bag, Phil, and her cat. Because it wouldn't be an eighties Italian film without it, the team get in a taxi and watch the vibrant New York landscape pass them by. They continue swapping locations, within the city limits of New York, and Gloria gets to be a badass fighting off all the assailants coming after them, until she ditches the kid because he's a wisecracker. Don't worry, she gets him back (after having another badass fight), and they have a happy ending after escaping New York.

The film was remade in the United States in 1999, with the same name, directed by Sidney Lumet and starring Sharon Stone and George C. Scott in his final role, though very poorly received. Other films that have used elements of it in homage include Ultraviolet (2006) and Leon.