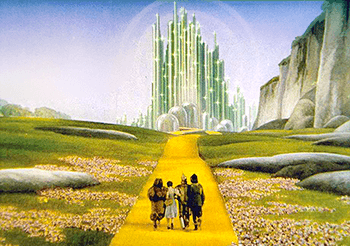 They're off to see the wizard.
Advertisement:

This is the pathway a character has to travel along to get to their ultimate goal. Deviating from the path is not an option, and even if you attempt to do so for any brief period or for any reason, inevitably you'll have to go back onto the path to complete the journey's chief objective.

It doesn't have to be a literal pathway, but can refer mainly to the route that a character needs to travel along to get from start to finish. Also note that there aren't multiple goals to be fulfilled beyond the end of the journey; the journey's end is just that.

Not related to No Sidepaths, No Exploration, No Freedom, which focuses mainly on videogames' design; this trope focuses on linear storylines within all media.

Compare Stay on the Path and But Thou Must!. Contrast Screw Destiny.

If the ultimate goal of the story is to get the character home, that's The Homeward Journey. If the destination is a place of legend, that's The Promised Land. If this is the only way to get to the villain's lair, it's Walk into Mordor.