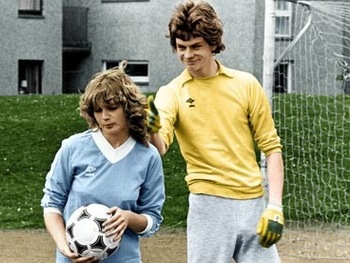 Gregory's Girl is a Scottish teen Romantic Comedy written and directed by Bill Forsyth and released in 1980.

The movie begins with Coach Menzies (Jake D Arcy) looking to replace some of the players on the school's football [soccer] team, including Gregory (John Gordon Sinclair), the goalie. Despite it being a boys-only team, Dorothy (Dee Hepburn) tries out for the team and proves to be far more talented than the other prospective players. Gregory becomes infatuated with her, leading to a series of misadventures as he builds up the nerve to ask her out on a date. Over the course of the movie, he seeks help from his friends and his little sister in an attempt to win Dorothy's heart.

Gregory's Girl was ranked 30th in the British Film Institute's list of the top 100 British films and 29th on Entertainment Weekly's list of the 50 best high school movies. A clip from the movie was played during the opening ceremony of the London 2012 Olympics.