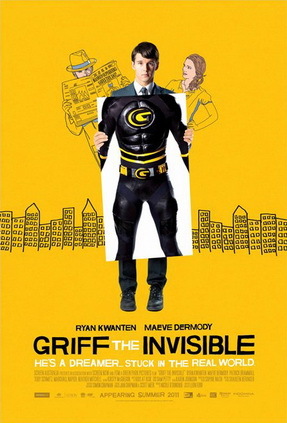 The greatest superpower is love.
Advertisement:

Griff the Invisible is a 2010 Australian romantic comedy-drama written and directed by Leon Ford.

Our hero is Griff (Ryan Kwanten), a socially awkward office worker who is bullied by his workmates during the day but at night he becomes Griff the Invisible, a superhero who patrols the streets of his neighborhood, fighting bad guys and protecting the innocent. Griff's life is transformed when he meets a beautiful young daughter of a hardware store owner called Melody (Maeve Dermody) who shares his passion for the impossible.