Western Animation / The Guardians of the Lost Code 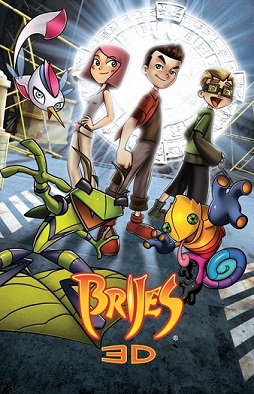 The Guardians of the Lost Code (Brijes 3D) is a Mexican animated film released in 2010 as part of the festivities of the Bicentennial Anniversary of Mexico's Independence.

In the beginning, when there was magic in the world, humans lived in harmony with magical beings called "Brijes". Each human would have a Brije assigned to him or her as a magical guardian; when the human turned 13, it was a custom to be instructed in the art of "Synchronicity" in which the human and Brije would fuse their bodies into something called "The Warrior Form". For thousands of years this alliance worked wonderfully, but as humans stopped believing in magic they stopped believing in Brijes too, and many Brijes who were left alone without a master were corrupted by The Dark, who manipulated them in order to obtain the secret of the synchronicity and turned them into Dark Brijes. The Dark soon launched a conquest against the few humans who still believed in magic and one by one they were conquered, but the secret of the synchronicity remained safe.

Now, in the present day, planets and stars have aligned and there's a prophecy of three young chosen ones who will find the codex which contains the secret of the synchronicity and use it to vanquish the darkness and restore the alliance between humans and Brijes. Three kids, Freddy, Kimo and Atzi, are the chosen ones for this quest, but the Dark will do everything to stop them and claim the codex for itself.