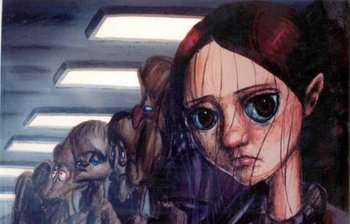 A rather downtrodden man goes on his morning commute, struggling to make his way through the teeming masses that, like him, are flooding into the subway to board trains. As the man stands at the platform waiting for a subway train, he sees a nervous-looking young woman. As he watches, the young woman extends a foot to the edge of the platform, seemingly about to jump off and hurl herself in front of a train. Thinking quickly, the man fights through the crowd and grabs her before she jumps—an action that has unexpected consequences.