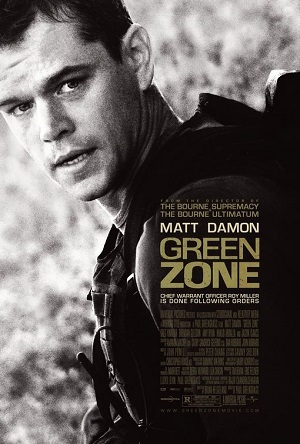 2010 Suspense/Thriller movie from Paul Greengrass, the same director as The Bourne Series.

It is 2003, and the Iraq War has just begun. Chief Warrant Officer Roy Miller (Matt Damon) has been running some missions trying to find Weapons of Mass Destruction, but for some reason every place his team hits comes up empty. When he raises concern over the quality of the intel he is getting regarding the WMD, his superiors dodge the question.

Miller then sets off to find out what is really going on regarding the weapons, and he is aided in his quest by Martin Brown (Brendan Gleeson), a CIA official, Lawrie Dayne (Amy Ryan), a writer for the Wall Street Journal, and Freddie (Khalid Abdalla), an Iraqi civilian. He hopes to be able to find out the truth from an Iraqi government official known only as "Magellan" but this earns him the wrath of US government official Clark Poundstone (Greg Kinnear), who has a Special Forces team under his command...

Not to be confused with Green Hill Zone.