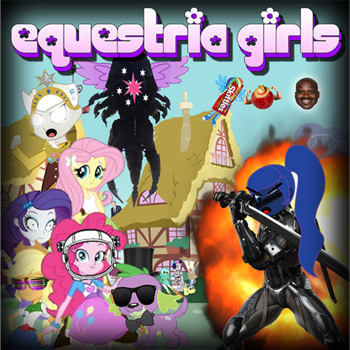 Just like the movie.
Now the story of six human ponies, who know nothing and the one apple who had no choice but to squash them forever. It's Equestria Girls!
— Opening Narration to Physics

EQUESTRIA GIRLS (yes, the all-caps is intentional; yes, it is mandatory) is a series started by YouTube user ZXInsanity

, and expanded upon by users Blarghalt

. It is, first and foremost, an absurd parody of the My Little Pony: Friendship Is Magic Spin-Off of the same name.

As far as parodies go, it's unique in that it predates the movie it's lampooning by four months, when the only information available was a few pieces of concept art, so that's what was used. Also, all the voices are generated by text-to-speech programs. note The only exception to this so far is MrDeLoop's Day Of The Flutter, where at least two sequences (including the final push to the climax) use real voices.

Watch them if you dare.

And if you still wish to comprehend their curious world, go to this link here