Web Animation / Duel of the Fates 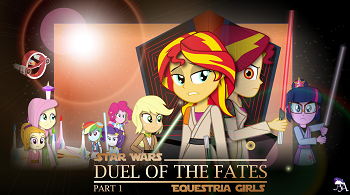 A Crossover between Star Wars and My Little Pony: Equestria Girls.

This web series tells the story of the Council of Harmony, a secret division of the Jedi Order that studies how the Force affects bonds and friendships, and the recently-reformed jedi knight Sunset Shimmer.

In the months after Sunset was saved from the dark side by the Council, who used a group of powerful artifacts known as the Elements of Harmony, Jedi Master Twilight Sparkle has disappeared under mysterious circumstances. This, in turn, has made many suspect that Sunset Shimmer may have had a hand in Twilight's disappearance.

As Sunset struggles with alienation, the rest of the Council spreads out across the galaxy in search of their missing leader.

Duel of the Fates Part 1

Duel of the Fates provides examples of:

As stated above, everything in the series is written in Aurebesh, as is fit for a Star Wars parody ; The documents which Twilight reads in secret in particular. They explain or hint to some background story elements. Since these informations are likely to come into light later, but aren't really essential to understand the plot, they are trancripted here without being marked as spoilers.

This message is intended for those that follow the path of Harmony ; and as an apology for those we failed.

I, Celestia, Solar diarch of the Equus System and bearer of the Element of Magic, formally dissolve the Equestrian council for our failure to prevent the greatest tragedy that must never be known.

Hubris, plain and simple. That of the council, but most of all my own. The idea that we, representatives of the virtues, and conduits of the energies of the Heart of Harmony was (sic) ultimately what was our undoing… So self-assumed were we, that when the unspeakable happened we were too blind to see it.

It is with heavy heart that the remaining members of the council enact this final edict. The training of and responsibility over Force-sensitives shall be transferred to the Jedi High council based on Coruscant. A new temple shall be erected over the old and shall serve as the next bastion of those that seek the Light.

As a final precaution to ensure that such a tragedy can never reach the same scale, the remaining masters, myself included, have communed with the Heart of Harmony through its node on the surface, the Crystal Tree. The Nobility of the Equus System shall never bear seed that can commune directly with the Force. Myself included.

It is our hope that the separation of these key institutions can act as a safeguard to prevent complete tyranny over all we hold dear. The initial members of the council of Harmony will be those left behind until the elements have chosen their respective successors.

By order of the Equestrian council, this document and those related is (sic) to be redacted from all records. Access may only be obtained by the current diarchs and the council of Harmony.

Excerpt from the journal of general Firefly : The Nightmare Incident

The Lunar Guard launched the first assault within the capital. As befits, they struck under the moonlight. The Solar Guard reacted admirably, evacuating citizens and keeping collateral damage to a minimum.

Ultimately, it was not a battle to be won. When we received confirmation that Princess Celestia had made it safely to the temple of Harmony, we ordered our forces to pull back as it became evident that the Lunar Guard were also taking steps to preserve the capital. A sobering thought that they were aware that wanton destruction would result in them ruling nothing more than a pile of rubble.

The skirmishes did not end there. The two branches of Royal Guard, their ranks bolstered by the Force-sensitive warriors of their respective diarch, continued to fight for control of Equus-1. Thankfully the other inhabited planets of the system remained fairly unscathed, which helped greatly in the rehabilitation of the capital planet.

Nevertheless, the cost was high, too many to list from both sides. The Jedi said that they had been taken in by some sort of Dark Side trickery. While that may be true in some cases, most of the prisonners I talked to seemed to simply believe their ideology and vision for Equestria to be for the best. I used to call some of those zealots friends.

At the very least, whatever outside source sparked this tragedy has been contained by the Jedi. Princess Luna is nowhere to be found and the nobility seem to be pushing the idea that her cousin, duchess Selena, be crowned Luna II… With the dust settled, the first thing they want to make sure is that the Lunar Throne be occupied.

After all this, I doubt I can go on. I’ve talked to Princess Celestia, and she has accepted my resignation.