Holy Is Not Safe 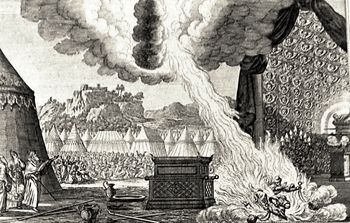 Take note: God prefers charcoal over gas.
"But He said, 'You cannot see My face; for no man shall see Me, and live.'"
— God to Moses, Exodus 33:20, The Bible (New King James Version)
Advertisement:

Everyone knows it's a bad idea to mess around with evil. If you're foolish enough to poke a concentrated ball of malevolence, you've got no one but yourself to blame for the consequences. Conversely, we should expect goodness to be more, well, user-friendly? Less liable to reduce you to a pile of ashes for looking at it crosswise?

Don't count on it.

Even when Light Is Good, it can still be too hot to handle. Maybe holiness is judgment untempered by mercy, and only the most incorruptible people can come in contact with it and come away unscathed. Maybe it's really temperamental, and objects violently to being used for any but the most noble causes. Maybe it's just that light burns, and enough holiness in one place is naturally dangerous to anyone, not just the wicked. In any event, you'll probably rest easier with some safe distance between yourself and anything really holy.

This may be the logical extreme of White Magic. While Black Magic involves drawing power from others, and has a tendency to kill or corrupt anyone, White Magic generally helps others through self-sacrifice and purges evil. Think about the implications of this: purging evil can range from the depraved villain to the Noble Demon to even an Anti-Hero to anyone even remotely human, because all people are capable of evil and sin. Another way to think about is thus: If you aren't willing to make the sacrifice, you get punished, but if you are worthy enough, you get sacrificed. Likewise, anyone helped by your sacrifice is likely to be saved or punished by its effects.

Closely related to Holy Hand Grenade; the distinction is that this trope refers to holiness being inherently dangerous to Muggles, whereas Holy Hand Grenade is when holiness is weaponized in a way that is at least somewhat safe for the user. Also compare and contrast Holy Burns Evil and You Cannot Grasp the True Form. Sometimes manifests as Cast from Hit Points or Brown Note. See also Humans Are Flawed for a possible reason Holy Is Not Safe. Contrast Revive Kills Zombie, in which something beneficial to normal beings is harmful to unholy and/or undead ones. The Good Counterpart to Evil Is Not a Toy (though there are differences: Holy things will usually only vaporize the offender, while Evil is much more likely to corrupt the victim and turn them into a monster... best not to make any assumptions, though).

The Opening of the Ark

As in the scriptures, The Ark of the Covenant in Raiders of the Lost Ark is an inherently dangerous artifact. Indy and Marion aren't killed by it because Indy remembers the Bible saying not to look upon the open Ark. Those Wacky Nazis aren't so lucky, and pay the price in nightmarish fashion for their greed and arrogance.

The Opening of the Ark

As in the scriptures, The Ark of the Covenant in Raiders of the Lost Ark is an inherently dangerous artifact. Indy and Marion aren't killed by it because Indy remembers the Bible saying not to look upon the open Ark. Those Wacky Nazis aren't so lucky, and pay the price in nightmarish fashion for their greed and arrogance.