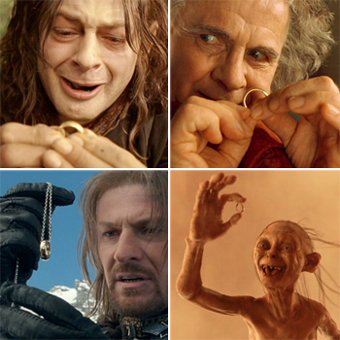 "My precious..."
"This stone is not yet twenty years old. It was found in the banks of the Amoy River in southern China and is remarkable in having every characteristic of the carbuncle, save that it is blue in shade instead of ruby red. In spite of its youth, it has already a sinister history. There have been two murders, a vitriol-throwing, a suicide, and several robberies brought about for the sake of this forty-grain weight of crystallised charcoal. Who would think that so pretty a toy would be a purveyor to the gallows and the prison?"
— Sherlock Holmes, "The Adventure of the Blue Carbuncle"
Advertisement:

The Artifact of Attraction is an object that inspires obsession. It can cause a group of friends to become paranoid and distrustful, making them stop working together or even come to blows over ownership. Unsurprisingly for an object that can bring about a veritable Hate Plague on those who set eyes on it (or even just know of its existence), the Artifact of Attraction tends to be a powerfully cursed item, though some mundane objects can become this trope merely through reputation and uniqueness.

Any object can serve as an Artifact of Attraction, but they tend to have a certain je ne sais quoi. They may be a luxury item (like a fashionable pair of red shoes or a ring), or perfectly mundane (a red stapler or a warm blanket).

Knowing the Artifact of Attraction is capable of this doesn't stop the effects it causes, but may give the heroes enough warning to resist the effects long enough to destroy it or give it to the bad guys. Of course, because of its nature, no one wants to destroy it, making this kind of curse ideal for preserving an Artifact of Doom and Amulet of Dependency from being destroyed. It can also turn the possessor into a Doom Magnet, as countless people die fighting among themselves while attempting to claim the artifact.

Though plenty lethal on its own, the Artifact of Attraction may be triple enchanted to serve as an Artifact of Death (to up the kill count) and as an Artifact of Doom (to corrupt the hapless holder) and serve as a trifecta of desire, death, and corruption. This can cause a character to become Drunk on the Dark Side if the artifact grants its bearer some form of supernatural power.

To neutralize such problems, the heroes can always follow the example of the Hope Diamond and donate it to a museum. That kind of unselfish act often means that the curse is broken while the item is kept in a safe place for everyone to enjoy... and get stolen by villains too dumb to realize Evil Is Not a Toy.

A Sub-Trope of MacGuffin.

Compare Glamour, Hypno Trinket, and Magic Is a Monster Magnet. Compare & contrast Gold Fever, which is about people turning greedy and paranoid when suddenly gaining ordinary material riches (often gold). See also Apple of Discord, which is not about the object, but a group of friends bickering to the point of coming to blows after a seemingly trivial comment or question (who is fairest, strongest, etc).