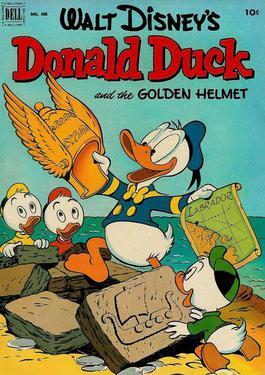 The Golden Helmet is a Donald Duck story written and drawn by Carl Barks, first published in Four Color #408 in July, 1952.

We start once again in the Duckberg Museum, where Donald has a job as a security guard. Donald is bored with the droll of modern civilization, yearning for adventure like those of the Vikings. He then notices a shifty character trying to pull up the boards of a Viking ship on display. After shooing the guy away, Donald recalls the character is usually around, and wonders what’s so interesting about the ship. Deciding to investigate, he finds an old deerskin map inside one of the peg holes, and presents it to the curator. Unaware that the shifty guy is listening outside the door, the curator translates the deerskin and reveals it to be the log of one Viking, Olaf the Blue. In the year 901 AD, Olaf landed on Labrador in North America and claimed the continent for him and his kin, burying a golden helmet as proof of his discovery.

The excitement at discovering who first found America is cut short when the shifty man appears, accompanied by an equally shifty lawyer, Sharkey. The man claims to be Azure Blue, a descendant of Olaf’s, and both the map and Golden Helmet are his inheritance. Worse, due to the un-repealed, “Code of Discovery” drafted by Charlemagne in 792, this means all of North America belongs to Blue as well! There’s no way to prove Blue is descended from Olaf, but there’s also no way to prove that he isn’t.

Blue and Sharkey set out to Labrador to claim the Helmet that would be the proof of his ownership, as does Donald and the curator. Donald takes his nephews by sea, while the curator goes by land, hoping that one of them will beat Blue to the Helmet.

Along the way, both expeditions run into trouble, as Blue eagerness to get the Helmet first means his ship run into trouble and become damaged, forcing Blue and Sharkey to steal Donald’s and force the Ducks onto a dinghy. The Ducks fashion a makeshift sail and continue on their way, while the curator’s helicopter lands early due to engine trouble, forcing the curator to make the remaining hundred miles on foot.

Eventually, the Ducks and Blue reach the coastline where the Helmet is supposed to be hidden. The spot is reportedly marked by a cross-shaped rock formation, but no such landmark can be seen. But, the nephews realize that after being struck the waves for a thousand years, the formation must have been carved away. They find the Helmet under a bird’s nest, but Blue and Sharkey show up to take it from them. The villains are stopped by the convenient arrival of the curator, exhausted from his hike but still with enough strength to help.

The group takes the ship out to sea, planning to throw the Helmet out where no one can misuse it. But the prospect of owning America is too tempting, especially with Sharkey’s prodding. First, the curator decides to claim American himself, planning to make a museum-based culture, but his 100-mile hike takes him down easily enough. Then Donald gets ahold of the Helmet and plans to become the Viking king of America. He won’t make any changes…he’ll just charge people to breathe the air!

Leaving everyone but Sharkey on an iceberg with enough supplies to last until he gets back to civilization, Donald goes off to make his claim. But due to his nephews taking away the ship’s compass, they have no way of reaching America. When they get too close to an iceberg holding a polar bear, Donald and Sharkey lose their food supplies to the hungry beast. Meanwhile, the nephews carve their iceberg into a ship, planning to drift back to land. They reach Donald, who recants his earlier mistakes and decides that after what he’s been through, he longer wants to be owner of America. Sharkey decides to claim America for himself, but Huey, Dewey and Louie have had enough of these would-be emperors and attack Sharkey, knocking the Helmet into the ocean.

And so, Donald returns to his post as guard of the Duckberg Museum. After the journey he’s been on, he has a better appreciation for the softer parts of modern life, and even goes off to take in the more peaceful exhibits.

Don Rosa would eventually write a sequel, "The Lost Charts Of Columbus" where Blue and Sharkey try their scheme again with different, older claims.

This story has examples of