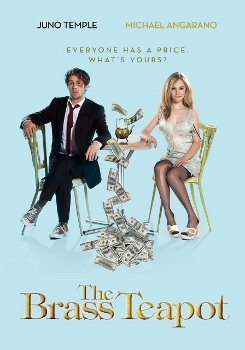 "No Pain. No Gain."
— Tagline
Advertisement:

The Brass Teapot is a 2012 dark comedy film directed by Ramaa Mosley and starring Juno Temple and Michael Angarano.

It tells the story of a young married couple, John (Angarano) and Alice (Temple) Macy, who are dirt poor but very much in love. One day they come into possession of the eponymous Brass Teapot, an ancient magical artifact that provides them with money when they hurt themselves. The film then goes on to show the extents to which the Macys will go to continue benefiting from the teapot’s power.