Fanfic / A Change of Pace 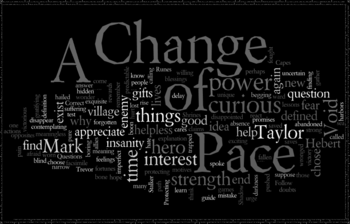 . Can be found on SpaceBattles

, and cross-posted on Fanfiction.net

In an Alternate Universe of Worm, Taylor Hebert is visited by the Outsider in a dream shortly after the Locker Incident, who gifts her with his mark and allows her to express her canon power through it, granting her abilities similar to those in the game as she strives to be an independent hero.