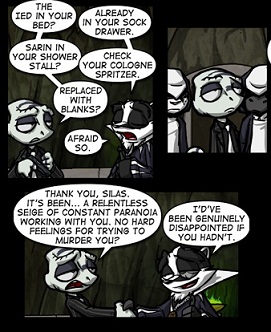 Just because your boss has betrayed you and will sacrifice you to his god is no reason to be impolite about it.
"Clever girl..."
— Robert Muldoon on being outmaneuvered by a velociraptor, Jurassic Park

A character graciously concedes a point while trying to save face. This is usually accomplished by saying words such as "Touché" (a term in fencing that acknowledges an opponent landing a hit), "point taken", "I stand corrected" (both when losing an argument) or "Well played".

There can be any manner of stakes and the form of defeat can vary from losing a minor argument to being Out-Gambitted in a war. When someone merely has to admit that a good joke was made at his/her expense, it's Actually Pretty Funny.

It's often spoofed when someone tries a really pathetic plan, it gets easily beaten, but the planner acts as though he/she was outwitted by a master.

Compare Worthy Opponent and Graceful Loser, who are likely to use this.

Contrast Sore Loser, who will not.