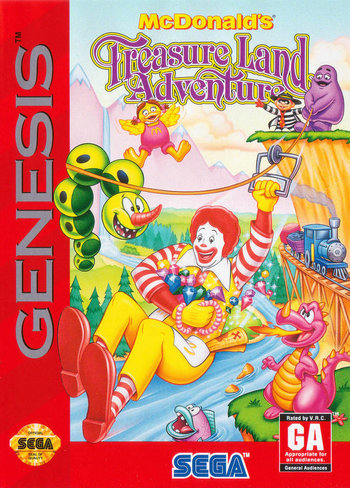 McDonald's Treasure Land Adventure is a 1993 licensed Platform Game by Treasure (excuse the pun) for the Sega Genesis.

The story is as follows: Ronald McDonald is walking in the magical forest one day when he spots a piece of paper underneath a large tree. To Ronald's surprise, its the piece of a treasure map. Ronald wonders where the rest of the pieces are, but unbeknownst to him, the other pieces of the map are in the hands of some dangerous bad guys. Ronald decides to go on a treasure hunt in search of the rest of the pieces.

Treasure Land Adventure has a simple structure. You play as Ronald McDonald on a linear platforming adventure through different worlds on his treasure hunt, fending off enemies and other obstacles. Ronald's main weapon is his magical blast, which gets stronger with upgrades. He can also use his wrist scarf to grab handles overhead to reach higher platforms. Along the way he will run into other McDonald's characters, like Birdie, Grimace, and the Hamburglar who will help him on his quest.

The game has three different difficulty settings, that affect enemy strength and how items work.

A handheld spin-off, Ronald in the Magical World, was released for the Game Gear exclusively in Japan one year later (under its Japanese title Donald No Magical World).

This treasure hunt contains examples of: