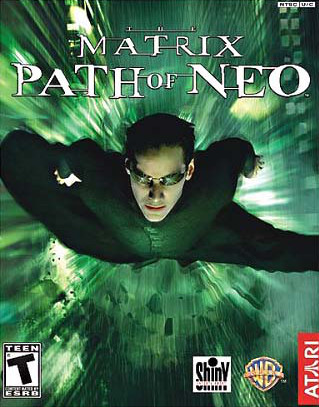 Everything about Path of Neo screams "Matrix" at nearly every turn.
— IGN
Advertisement:

The Matrix: Path of Neo was made by Shiny Entertainment, Atari and Warner Bros. in 2005 as part of The Matrix series. It was made Multi-Platform for the PlayStation 2, Xbox, and PC. You start play as the office worker, Thomas Anderson and progress into Neo over the course of the game. It takes place during, in between and at the end of the trilogy.

Gameplay is mainly fighting Mooks, Security guards, SWAT, Agents and many others. It's your basic third person problem-solving with killing enemies to open doors, escort-missons, except with Bullet Time!

It was received much better by both critics and fans than its predecessor, 2003's Enter the Matrix. It was followed by The Matrix Online.

The Matrix: Path of Neo provides examples of the following: