Locked in the Dungeon 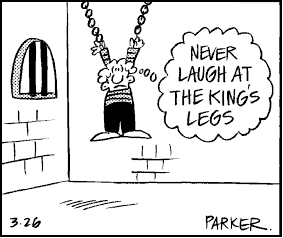 Common in medieval settings and spy stories. Expect our heroes to escape from one at least once, even in video games where they are strong enough to beat down the guards when you finally fight them. Unless it's that kind of story, in which case escape is impossible but probably not wanted anyway.

The heroes may occasionally be thrown into the dungeon because they are falsely accused of a dangerous crime. If so, expect a jailbreak attempt.

Compare Torture Cellar, for more modern examples. Only loosely related to Dungeon Crawling, where "Dungeon" refers to a monster-filled area in Tabletop Games or Video Games.

An interesting fun fact is that technically, the use of "dungeon" for a castle's prison is a misnomer, albeit one that's got into the dictionary by sheer age. A "donjon" was originally the main building of a castle. When gunnery made castles militarily obsolete they were used as prisons, until "dungeon" became just a fancy word for a prison. The association with torture chambers is self explanatory.

Most of the time, the Man in the Iron Mask is in a dungeon.