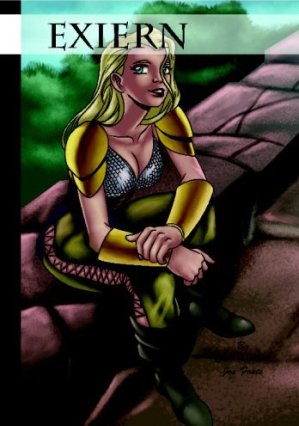 "In a World… where Unicorns purr...

It is a world of magic...mystery...and really big boobs!"
Advertisement:

is a fantasy webcomic about a reluctantly female barbarian. The plot, which began as a riff off of an early storyline of

The Wotch, is relatively simple: Evil wizard Faden, about to fall to the sword of hulking barbarian warrior Typhan-knee, tries to transform the hero into an animal and somehow transforms him into a woman instead. Since it can't be undone, the barbarian, now going by the name of Tiffany, goes on a variety of adventures.

Originally written by Drowemos (despite the obvious connections to dark elves and whiny teenagers, it's actually "some word" spelled backwards) and illustrated initially by Drowemos (2005), then by Studio Boom (2005 - 2010) and currently by Shipeng Lee of Drowtales (2010 -). Later, the comic was sold to Dan Standing, as Drowemos got tired of working on it. The writing duties have since been handed off to Thomas Knapp, the writer for MegaTokyo's Endgames light novels. The writer duties then changed again to current owner Scott T. Hicken.

Although it is one of a number of Webcomics with transgender themes, Exiern is infamous for both mocking and reveling in fanservice scenes; Drowemos in fact paid for his web hosting bills by selling access to the uncensored comics (as well as a number of other R and PG rated bonus comics) using a membership system. The membership site has since been spun off as something completely separate, and a Patreon page is now available for fundraising - although some bonus art does still include nudity it is no longer the dominant material available.

Drowemos is also the author of the web manga Blade Bunny.

Note that thanks to author swaps and ongoing site rebuilds, most of the links below are broken.

Note : the new website appears to be up at https://exiern.thecomicseries.com/

However not all pages have been reposted yet.