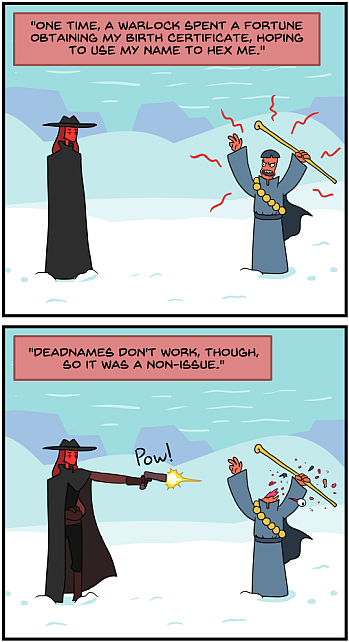 One of the most basic things to acknowledge about transgender rights is the simple fact that people are the gender they say they are. A lot of Trans Tribulations come about from characters (or in the worst cases, the narrative itself) refusing to acknowledge this. While society has largely begun to accept trans people, to the point where a character who deliberately misgenders someone is far more likely than not to be unsympathetic (and yeah, it's a low bar, but it's progress), shutting them down with a complicated sociology lecture would rather slow down the plot (unless it is the plot, of course).

Enter this trope: some aspect of the setting confirms that a trans person is as much the gender they present (or even the gender they've yet to present as) as a cisgender person of the same gender. This might be as simple as a Residual Self-Image or mirror showing their true self, something subtler like having access to a Gender-Restricted Ability or Magical Seventh Son/Daughter powers, or as complex as them fulfilling a role in a prophecy. It can also apply to more "meta" validations, such as being treated as the correct gender by game mechanics. While it's become more common in The New '10s (thanks to an increase in stories being written about, and by, trans people), examples can be found in folklore.

Often the source of a Prophecy Twist (a trans woman and the child of a trans man can say they're No Man of Woman Born just as easily as someone born via caesarian section). Contrast Unsettling Gender Reveal (which typically carries the implication that a character's presented gender was a deception of some sort) and compare Samus Is a Girl (which plays with expectations of a character's gender when it hasn't yet been revealed).

Not to be confused with Gender Bender, which is actually about sexual anatomy and doesn't, on its own, confirm or deny their inherent sense of their own gender.