Fanfic / Harry is a Dragon, and That's Okay 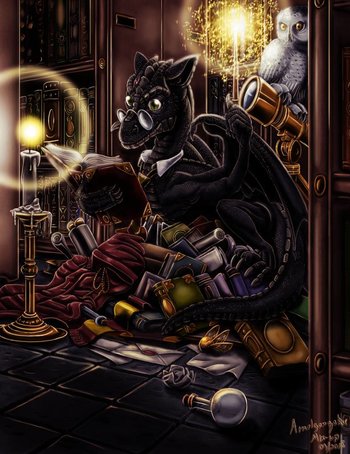 Harry Potter is a dragon. He's been a dragon for several years, and frankly, he's quite used to the idea — after all, in his experience nobody ever comments about it, so presumably it's just what happens sometimes. Magic, though, THAT is something entirely new.
Advertisement:

Harry Is a Dragon, and That's Okay

(also posted at Archive Of Our Own

) is a Harry Potter fanfic by Saphroneth

, the author of Ashes of the Past, Vulpine and Saruman of Many Devices.

The premise is... Exactly What It Says on the Tin. Somewhere during his childhood, Harry Potter turned into a dragon, but since no-one seemed to notice or care, he assumed that it was just something normal that happened to some people, even though he never saw any other dragons anywhere. That lasts until his 11th birthday, when a giant named Hagrid appears and sees him as a dragon for the first time, and Harry is soon drawn into a world that's much more interesting and magical, where being a dragon is, while certainly not normal, still just as okay.

The story was developed and community-reviewed on Spacebattles

, then assembled into completed chapters and published to FanFiction.Net. As of July 4, 2021, it is fully complete with a total of 102 chapters including the epilogue.

Harry Is a Dragon, and That's Okay provides examples of:

open/close all folders
A-D
E-L
M-S
Advertisement:
T-Z
He was home, and the rest of his life was just waiting for him. He had his friends, and his things, and there was a place for them and they were all happy there.
Harry was a dragon, and everything was okay.

Alternative Title(s): Harry Is A Dragon And Thats Okay