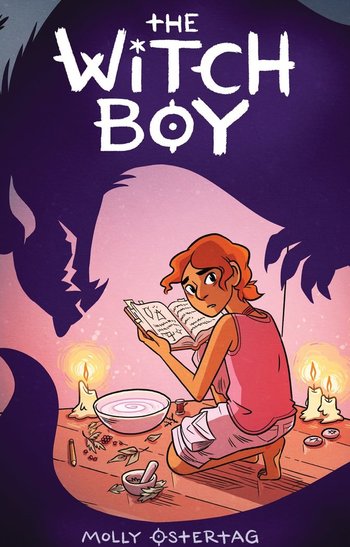 The Witch Boy is a graphic novel published in 2017, and written and drawn by Molly Ostertag.

Aster is one son of a magical family living in a hidden part of the woods. Traditionally, boys have been raised to become shapeshifters, who use their animal forms to defend their dwellings from demons. As for girls, they are trained in the arts of spells, becoming witches who maintain their homes and forest. Aster, however, has failed the shapeshifting ceremony several years in a row and has much more interest in studying spells and becoming a witch.

Due to an old catastrophe with Aster's great-uncle who broke the rules, his family does not dare teach him witchery like the girls. But that ancient evil turns out to be much closer than they believe, and Aster is eventually faced with confronting it when his cousins disappear.

It received a sequel in October 2018, titled The Hidden Witch, followed by The Midwinter Witch in November 2019. In January 2021, it was announced that an animated musical film adaptation

will be produced for Netflix.

Not to be confused with Russell Moon's Witch Boy trilogy and DC Comics's Klarion the Witch Boy.

The Witch Boy provides examples of: