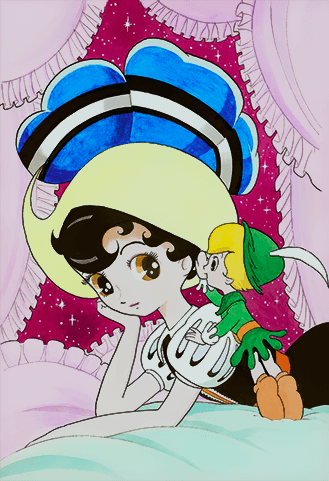 In Heaven, the souls of unborn children are being prepared for their births. Tink, an inexperienced apprentice angel, accidentally gives a child who will be born female both a pink "girl's" heart and a blue "boy's" heart. When this is found out, it's too late to fix the mistake, so Tink is banished to Earth in a weak mortal body to watch over the twin-hearted child.

Meanwhile, in a vaguely medieval kingdom note the name varies depending on the version: it is Sapphire in the 50's manga, while it is Silverland in the 60's manga, the King learns to his dismay that the Queen has given birth to a girl and due to complications, cannot have another child. Women cannot inherit the throne and the King knows that his closest male relative, Duke Duralumin, is a wicked man who would make the dim-witted Plastic his Puppet King to oppress the people. So the King pretends that Sapphire is a boy, with only a handful of close advisors knowing the truth.

Thanks to her dual nature, Sapphire is equally adept at male and female activities — even if the latter must be taught in secret. The story picks up in Sapphire's early adolescence, as Duke Duralumin steps up his attempts to prove the Prince to be a girl, and Tink finally finds Sapphire in the mortal world. And it's a good thing Sapphire has a new ally, as the Duke is not the only force that threatens the kingdom.

Ribon no Kishinote Literally, Ribbon Knight or Knight of the Ribbon was created by Osamu Tezuka in 1953 and is one of the earliest best known Shōjo manga note  The category existed since 1913 . The original manga series ran from 1953 to 1956 and proved popular enough to be granted a sequel, The Twin Knights, starring Sapphire's daughter, Princess Violetta, on her search for her lost twin brother, Prince Daisy. During the '60s, Tezuka also made a TV anime adaption and an extended remake of the manga. Both versions followed roughly the original story up until close to its ending where they split off in their own directions. The new manga had Sapphire encountering the pirate Blood, the swordswoman Friebe, and the goddess Venus, all while overcoming the permanent loss of her male heart. The anime also played around with some of these ideas, but quickly put them aside in favor of a longer Story Arc involving a new villain, Mr. X.

The anime was broadcast in the United States as Princess Knight or Choppy and the Princess, the latter being at first the title of a short movie made by mashing together three of the episodes. Distribution of the American version was spotty at best, and it wasn't until 2012 that the show got a proper DVD release. The 60's manga has received an English language two-volume collected release from Vertical inc in 2011 and a similar release of The Twin Knights saw the light of day in 2013.

The Princess Knight franchise consists of: