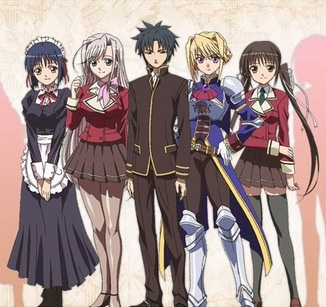 Ordinary High-School Student Teppei Kobayashi has just lost his parents in a strange car accident, leaving him all alone, until his maternal grandfather decides to take him in. The day Teppei's supposed to meet with him, he spends time at his parents' grave, until he sees a beautiful girl in a horse-drawn carriage, chased by some thugs. Seeing her scared face, Teppei decides to help, so hops on his bike and somehow manages to rescue the Damsel in Distress, but not without some nasty accidents, guns, an angry Battle Butler, and a fall down a cliff that should've killed him and the girl outright, yet they miraculously survive.

After the mess, Teppei meets with his grandfather Isshin Arima. It turns out Teppei's mother Kanae is Isshin's daughter, the next successor to the almighty Arima Financial Combine, and wants to prepare his grandson as his successor, considering him an excellent young man. Therefore, Teppei has his surname changed to "Arima", starts to live in one of the Arima mansions, and attends "Shuuhou Academy", the most elite highschool in the nation, in order to facilitate his debut into high society. The first person he finds out also attending the academy is the same beautiful girl he helped before, Charlotte Hazelrink, crown princess of the European Kingdom of Hazelrink. Over the course of the series, Teppei's joined by Sylvia van Hossen, the daughter of nobleman Vincent van Hossen of the Flemish Principality; Seika Houjouin, the daughter of the rival Houjouin Corporation; and Yuu Fujikura, a maid assigned by Isshin to be Teppei's caretaker and counsel.

Based on a successful PC eroge visual novel released in 2008 by RICOTTA, Princess Lover! got a 12-Episode Anime adaptation in the summer of 2009 by Go Hands, with its own series of light novels, manga adaptations and a "clean" Updated Re-release for the PlayStation 2. An H-OVA, released in September 2010, re-tells the story, with the focus on Sylvia van Hossen.

Tropes in Princess Lover! include: