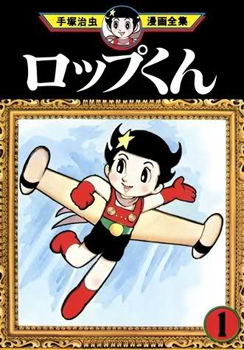 Astro Boy! No, wait... Jetter Mars! No, wait...
Roppu-kun is a manga by Osamu Tezuka about Roppei, a fisherman’s son who discovers a toy robot at the bottom of the ocean named Roppu. Roppu laid discarded there by an alien child but now with Roppei's help is reactivated as has a child friend once more. Roppu is a powerful robot and can do many amazing things, but will only answer to Roppei and is still just a toy.