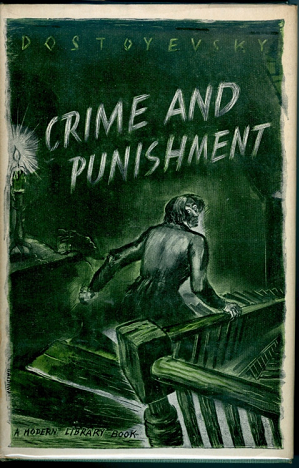 "What can I tell you? I've known Rodion for a year and a half: sullen, gloomy, arrogant, proud; recently (and maybe much earlier) insecure and hypochondriac. Magnanimous and kind. Doesn't like voicing his feelings, and would rather do something cruel than speak his heart out in words. At times, however, he's not hypochondriac at all, but just inhumanly cold and callous, as if there really were two opposite characters in him, changing places with each other."
— Razumikhin
Advertisement:

A moody university student named Rodion Raskolnikov murders an old moneylender who has been exploiting her clients, but accidentally also kills someone else. He struggles with the ramifications of his actions through the novel. While ruminating over his crime, he deals with visiting family, a nosy friend who falls in love with his engaged sister, an implacable police detective named Porfiry who plays mindgames with him, the all-too-obvious faults in his own Übermensch theories, and his budding relationship with a prostitute and her poor family.

Detective Porfiry is a primary inspiration for the title character of the Columbo TV Movie series.

If you came here expecting Crime and Punishment Series, please fix the link.

Adaptations of Crime and Punishment include: